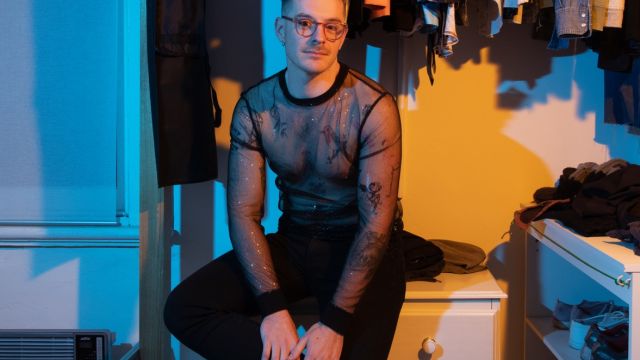 Here is an hour-long monologue performed with such directness and honesty that it compels attention.  Christopher Bryant, simply dressed as if he’s at the gym or about to go on a run, confides in the audience with an account, from various sources, of growing up gay.  Sometimes tentative, sometimes challenging, it’s part autobiography, part anecdotes from other sources; the show questions whether there is (to quote the program note) a ‘universality in the particulars of our [queer] experiences.’

‘Growing up gay’ continues, of course, way past the teens – and so it is here.    Discovering that one is, or could be, gay, how to feel about it when one isn’t sure what that means, what to do about it, how or when to ‘come out’, the uncertainties and tortures of body image, and then to discover that other people are gay too (‘Wow!’ Or, ‘Oh.’) and have they all been f**king each other and I didn’t know?  And then, how to go on living with these discoveries …

AV artist Justin Gardam provides a large screen upstage on which pertinent questions (and an extract from the movie Cruel Intentions) are projected.  Stage right, the text of Mr Bryant’s ‘talk’ is projected onto a smaller screen so that we can read his words as he speaks them.

This way we don’t miss anything, but it’s a production decision that curiously deflects attention from Mr Bryant himself.  I wonder how many of us read and listened but did not look at him the human actor as he spoke.  Meanwhile, at times he accompanies the words with counter-pointing movements.  In one sequence, he walks the edges of the box shaped stage as if on a tightrope - a particularly effective metaphor. 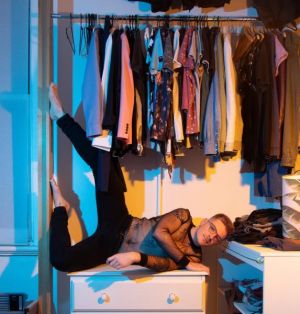 Such is Mr Bryant’s no frills, level voiced sincerity, however, autobiography and the anecdotes of others are difficult to distinguish one from the other.  Whose story are we hearing now?  The multiplicity of experiences might have a multiplicity of voices. That’s important since variety and difference is so much to the point.  And, with all due respect to sincerity, the direct and level delivery does get a touch monotonous and, despite the insights and revelations, the mind occasionally drifts off.

What we learn (for this is a learning experience), however, is that despite some few ‘universal’ connections in gay experience, there is no ‘universality’.  That would be no news to many in the audience, but it is reassuring to hear it confirmed.

To pick one moment, a story about a man (Mr Bryant?) and his ‘friend with benefits’, Max.  To pre-empt expectations, we learn they broke up, maybe because the narrator is twenty-nine and Max is twenty-one.  Lying in bed after sex, giving himself up to the intimacy, the narrator asks when or how Max came out.  At twenty-nine, the narrator has had years of uncertainty, subterfuge, shame, guilt, loneliness and hatred of his own body.  Max, by contrast cool and matter of fact, answers, ‘Oh, when I was sixteen or seventeen – I told my parents.’  One is happy for Max and one feels the pain of the narrator.

Or, perhaps a darker moment (or is it?), a different narrator tells of being penetrated by a middle-aged man while a photograph of the man’s wife and children smiles down from the bedside table.  What is the appropriate response to that?

At the end, Mr Bryant leaves the stage, but his voice and the projection of the text continue until we fade to black.  He returns to be met with enormous warmth from the audience.  With no bullshit, he has shared important things.