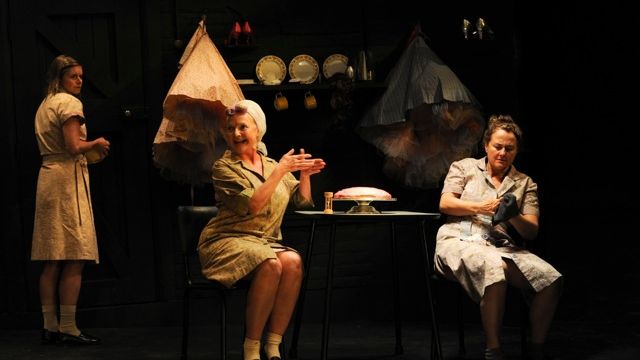 In the lead-up to the opening night of The New Electric Ballroom, director Kate Gaul said, “I think when the play starts you think who are these people and what are they doing?” And quite frankly she’s right, but what begins as a curious riddle, unfolds into a captivating story of family-politics and bittersweet longing for romantic love.

Despite being set in a small fictitious town on the West Coast of Ireland, Enda Walsh’s script is incredibly accessible, touchingly beautifully and unexpectedly very funny. This is a story of three sisters, Breda (Odile Le Clezio), Clara (Genevieve Mooy) and Ada (Jane Phegan) - their dreams, hopes and aspirations. Over potential cups of tea, slices of coffee cake and dry oat biscuits, Ada’s elder sisters Breda and Clara reminisce through rose-coloured glasses about time spent at The New Electric Ballroom as they hovered on the cusp of womanhood. This is a story that Ada has heard many times, starting from a young age, and one that has become mythologised into the family’s history so much so, that her own growth becomes shackled by it.

Kate Gaul’s direction is strong and bold and rises to the challenge of the script. She effortlessly weaves the action around the Griffiin’s confined space, pulls performances from the actors which are clear and intimate and gives each cast member a real opportunity to exercise their performance muscle.

Running at a solid 90 minutes, the cast are a powerhouse with each actor turning in believable and exquisitely developed characters. The performances from Odile Le Clezio, Genevieve Mooy and Jane Phegan are brilliant, while Justin Smith’s lovely portrayal of Patsy, the town’s simple fishmonger, a man searching for his purpose, is the perfect counter-balance. Through Natasha McNamara’s dialect coaching the cast achieve impeccable accents - delivered with such an authenticity it’s hard to believe you’re not watching a group of actors from Ireland.

Daryl Wallis’ perfectly timed sound design is beautiful and gives the production a haunting cinematic quality. As does Verity Hampson’s lighting design. Tom Bannerman’s monochromatic set, dotted with specific props and colour, is simple and effective and adds to the claustrophobic nature of the story. Hats off also to the Griffin’s Artistic Director Sam Strong for programming such refreshing work as part of the Independent season. He clearly has faith in his decisions and gives those he commissions from the space to do their job free from interference.

The New Electric Ballroom will subtly reach inside you, tug at the deepest, darkest corners of your mind and make you consider love, romance, family and your own purpose.