No End Of Blame 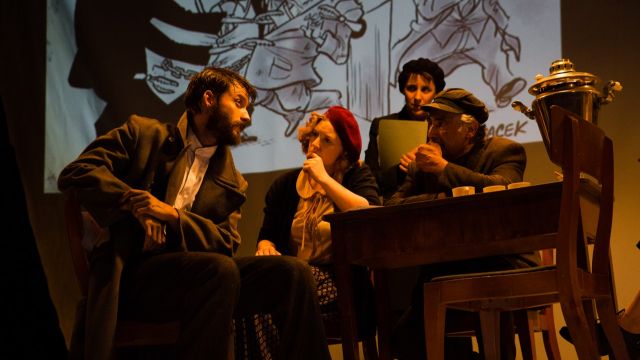 Sport for Jove has again defied its modest resources and reached for the gods with this ambitious saga from British writer Howard Barker.

Sweeping through the brutalities and oppressions of the 20th Century, No End of Blame, written in 1981, is a picaresque moral tale about a Hungarian cartoonist who refuses to bend his pencil to the will of regimes.

We meet our “hero”, Bela Veracek, as a young soldier in the horrific Carpathian Mountains campaign of World War 1, trying to rape a naked peasant woman at gun point and then stripped himself and about to be shot by his own men.  A powerful assaulting scene, with echoes of Brecht, this begins Barker’s two and half hour stagger through the world’s moral compromises.

Later, as artists in Budapest, Bela (an intense but modulated performance by Akos Armont), his more amiable friend Grigor (Sam O’Sullivan) and his wife Ilona (Lizzie Schebesta) escape the arcane conventions of the art academy, and leave for the new world of Lenin’s Russia. Barker’s writing is masterful. He mixes philosophical argument underpinned with vernacular truths and easy comedy. A standout is the earnest scene when a Soviet artistic committee argues away their new freedoms for the sake of approved state progress.

Alone, Bela emerges in Britain, a victim first of Churchill’s wartime censorship and, later, the commercial, low-brow concerns of his employer, the Daily Mirror.

Damien Ryan’s ensemble of eight actors expertly swap between many roles, most ordinary if well-sketched folk through the century.  Against a massive paper backdrop, their world from designer Melanie Liertz is a high, off-balanced stage surrounded by the clutter of backstage theatre and the odd actor waiting their cue, with our focus kept well lit by Fausto Brusamolino.

No End of Blamearguably unravels dramatically by its end but the defiant Barker probably intended it so, reflecting the unravelling life of the now depressive Bela.

This is a welcome break from Hollywood formulas and other soporific conventions of entertainment.  The players also include Amy Usherwood, Angela Bauer, Bryce Youngman, Danielle King and Monroe Reimers.