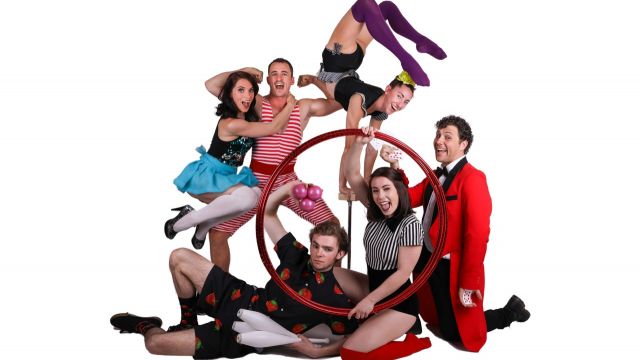 No Frills Cabaret is circus stripped bare; no set, no lighting, no MC, just a rotating banquet of some of the best circus and physical theatre performers Australia has to offer.

The show is perfectly suited to the open roofed Empyrean, one of the many venues in the greatly expanded Gluttony. And, with a 6.50pm start time, it’s the perfect way to get in the mood for a whole night of Fringe.

This show is the brain-child of Kiri Pedersen, Chris Carlos and Matt Casey who have been performing it in Melbourne to great acclaim for several years. At last they’ve brought it to Adelaide and, for me, it is the epitome of a great Fringe show: it’s raw, it’s simple, it doesn’t rely on glitz and glamour but it gives an opportunity to both seasoned performers as well as up and coming ones to showcase their skills. And the skills abound, including hoop acts, juggling, teeter-board, acrobatics, aerial, fire-eating, unicycling and contact juggling.

Each act is well produced and accompanied by a cracking playlist. The performers informally introduce the next act while Jobby, the rigger, and his off-sider AJ provide some laughs, along with very slick prop and equipment changes.

The show I saw included performances by the incomparable Malia Walsh, proudly pregnant hula-hooper extraordinaire; Odette Robbins, the most incredible and nimble bounce juggler I’ve ever seen; Anna Fisher, a sassy, pocket-rocket hula hoop artist; Chris Carlos, showcasing his fire juggling and eating skills, as well as his impressive physique; Jobby and AJ with a Teeter-board act that simultaneously frightens and delights; and Amanda Lee, strong, powerful and lithe hand-balancer and aerialist.

But the stand-out act for me was Simon Wright on his unicycle. I won’t give his act away here, but he quite literally had the audience in stitches of laughter.

All of these performers are involved in other shows during the Fringe, so why not get along to see No Frills Cabaret at least once, maybe twice?

See which acts tickle your fancy and then also get some tickets to see some of the other great work these performers are doing.