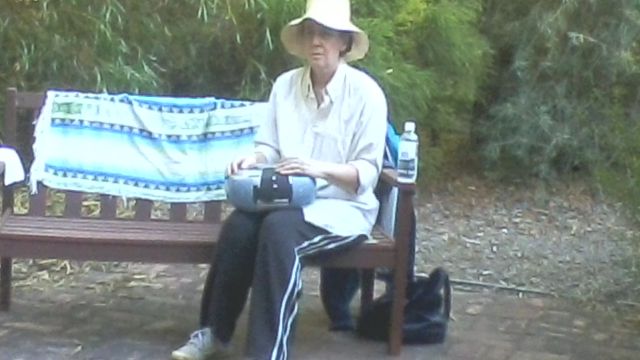 This is the type of enterprise that sums up what the spirit of the Fringe Festival should be all about. It begins with a premise of noble intent, then develops into an acutely insightful and beautifully empathic examination of a life fallen from grace, fallen between the cracks. It is also quietly engrossing, and as satisfying as any light entertainment that you might otherwise be seeking out at the Fringe.

A 40-minute monologue, delivered in the character of a homeless woman, has the potential to fall into a number of possibly fatal traps, but writer/director Tony Moore impressively manoeuvres his way around pretty much all of them. Thankfully, he knows the difference between a sanctimonious sermon and a smart, subtle slice-of-life. His script is full of telling detail and credible back-story, never resorting to attribution of outright blame towards any single factor for this woman's current state of existence.

Sole performer Joanna Webb is simply wondrous here. The actress knows that she doesn't need to shout in order to strike a direct hit to the emotions of her audience, and she absolutely never stoops to anything resembling caricature. Neither is her characterisation simplistically saintly; she is presented as a fellow human being, sharing and revealing herself in a way that we so infrequently find ourselves doing with strangers.

Only at the very end are the audience directly confronted with the quoting of statistics about the issues being dramatised here - as well as the live theatre equivalent of a shrewdly-chosen Hollywood closing credits song - but by then, No Privacy has earned itself the right to end in this manner.

During the journey home, this critic by chance happened to pass by an outlet of The Mission Australia. Tony Moore's outstanding contribution to this year's Fringe Festival is the kind of experience that helps to put moments like those into a perspective that is useful, compassionate, and lingering.