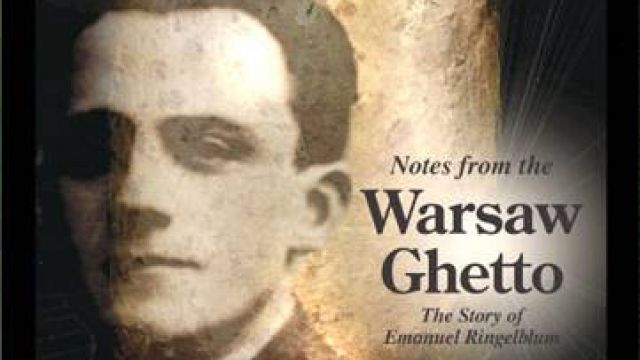 The Holocaust has inspired many artists around the world to share their interpretations of the events that, collectively, define the single greatest crime against humanity in living memory. As an historical event, it has become increasingly scrutable, thanks largely to the tireless endeavours of publishers, authors (such as Primo Levi), filmmakers (Steven Spielberg), archivists and benefactors who are determined to document the extent of the horrors before the generation of survivors are lost to us forever. And while it is a cultural imperative that we record and share these experiences to enhance our understanding of how such systemic annihilation of our fellow human beings could happen, it is also equally imperative that we do the telling of them justice: something which this ambitious Eagle's Nest Theatre production struggles to achieve.

The story of Emanuel Ringelblum bears extraordinary witness to the horrors of the Warsaw Ghetto, the single largest Jewish Ghetto in German-occupied Europe. Together with other members of the doomed community, he collected a wealth of information and documentation about such things as the effects of starvation and disease throughout the ghetto, as well as details about the revolutionary anarchists who would later form the foundation of the famous Warsaw Ghetto uprising – the single largest act of resistance and revolt by the Jews against the Germans during the Holocaust.

Director Ms Bongiovanni just doesn't seem to have been able to find a theatrically invigourating way to bring Mr Cole's didactic script to theatrical life. As Ringelblum, Mr de la Rambelje spends the night shuffling and generally fussing about with bits of paper and wandering upstage where these critical historical documents get filed away in some random order and location. The actors are also hindered by too much sitting and standing around, and too many unfulfilled comings and goings. Mr Stroud (who plays the young radical David), has the unenviable task of constantly arriving onstage to deliver increasingly desperate news about the escalation of human tragedy that was unfolding in the ghetto. That he was too often met by a lack of depth of reaction (other than cursory nods to how terrible it all was) made the night increasingly uncomfortable.

There also appeared to be some difficulty remembering lines, and the apprehensive and, at times inaudible cast, were not helped by the lack of atmosphere or even the fundamentals of design (there is no designer credited in the program). The over 25,000 individual pieces that made up Ringelblum's collection are represented by shambolic bits of paper and some second-hand books which only lends the production an unfortunate mood of a garage sale.

Mr Cole is to be acknowledged for bringing the story of Emanuel Ringelblum to a wider audience, but the overall feeling is that, while he obviously reveres his subject, he has not found the raw and honest connection with him and what he and his colleagues achieved, to make it a fascinating and illuminating insight. There's a great deal of idle and, ultimately, repetitive chat about Trotsky, anarchy and the sins of the Jewish Council (the Jews who formed what was essentially local government in the ghetto). But to come away from a night at the theatre that purports to tell the stories of the Warsaw Ghetto unmoved and underwhelmed, is to do the service of these memories a significant injustice. I hope it improves as the season progresses.