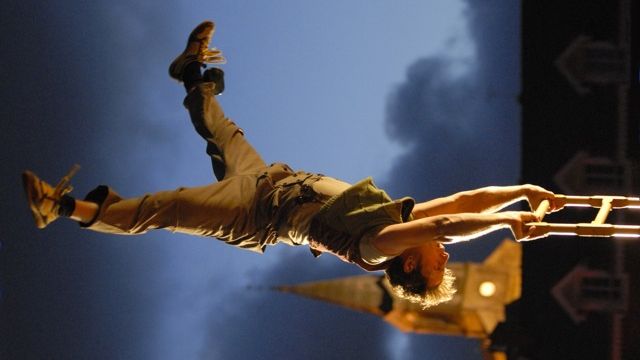 Oh Suivant! is a delightfully enlivening and fun intimate circus experience, in a comfortable small theatre at the Arts Centre, where everyone gets a great view of what is happening. The three children who accompanied me, a six, an eight and an eleven year old, were engrossed by this cheeky, funny, ‘five hander’.  Well it is a ‘two hander’ really - that makes very entertaining use of audience members! There is never a dull moment and not one word is spoken. Audience participation is superbly set up, as one would expect, by consummate street performers Fein Van Herwegen (pianist and assistant) and Dirk Van Boxelaere (D’Irque) juggler and acrobat. Oh Suivant! is brought to us from Belgium by Explosive Media, an insightful company who have been providing Melbourne with all sorts of fun community events for a couple of decades now.

Kids and adults alike are kept engaged, anticipating and wondering what is going to come next, as D’Irque, to Van Herwegen’s sensitively synchronized musical accompaniment, sets things up bit-by-bit with lovely little slights of hand and considerable audience assistance, to mini-climaxes of acrobatic feats and unusual juggling knacks.  And the final, of numerous climaxes, is ‘so fun’ as it most satisfyingly, accomplishes an elusive feat alluded to throughout the whole show.

Every show will no doubt vary, depending on the audience members who volunteer or are coopted into cooperating. Some will be more riotous and ridiculously funny than others.

My only quibble with the opening performance is with the lighting. I feel it is a little dull and needs some tweaking.

This not to long, not to short, charming, well rounded little show is highly recommended as a lovely, fun theatrical holiday outing for any family with kids of any age - from about four years up.

And it is mercifully very reasonably priced!