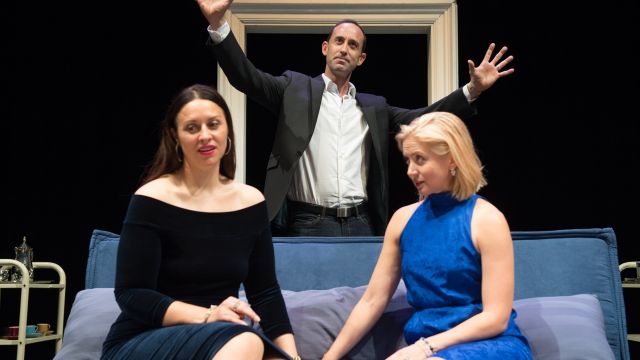 Bryan Ferry’s mid-70s-era interpretation of "Smoke Gets In Your Eyes" doesn’t get nearly as much exposure or recognition these days as this reviewer believes it should, so director Tony Knight’s decision to open his production of Harold Pinter’s 1971 play with the unmistakable Ferry croon certainly grabs the attention.

What follows is a piece of psychological gamesmanship – sometimes hinting at an escalation into outright warfare - that generally maintains a light tone on its surface while managing to suggest hidden horrors and suppressed secrets, some of which appear to be struggling to surface in Pinter’s dialogue, and others that have to be read between the lines…Do we, in fact, always remain the people whom we ‘used to be’? Is ‘identity’ shaped more by ourselves or by how others view us? Can memories ever be trusted?

In a living environment that includes uninhabited picture frames, displaying and reflecting only emptiness, a married couple prepare for her female friend to arrive. This reconnection is based, as are virtually all planned reunions in life, on pleasant memories of the past. In the universe of Harold Pinter’s characters, though, the past takes on characteristics of a foreign country, one where the atmosphere is usually murky, the details tend to remain mysterious even when seemingly ‘clear’ – or perhaps it is a country that one never actually visited…

Old Times is a curious experience indeed, but one that should find a receptive Adelaide audience - though it may not necessarily be the best place to start for Pinter novices. The relatively brief hour-long run-time prevents the proceedings from getting excessively knotted or drawn-out, but the ending may feel sudden and unsatisfying if you’ve been unable to get on the playwright’s wavelength. 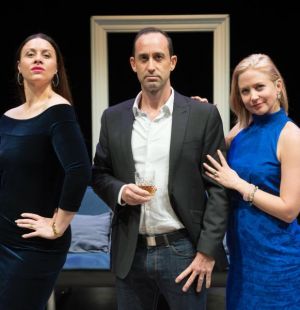 Though (at a guess) only about half of the characters’ conversations in Old Times are genuine three-way discussions (one person will often lecture to a second person about the third character while deliberately ignoring – or attempting/pretending to ignore - that character in question), the triangular format of the central conflicts here makes true ensemble strength in the cast an essential ingredient here.

Rachael Wegener portrays the visiting Anna as a force of nature who manages to retain an enigmatic air even while appearing on the surface to be open, outgoing, fearless, and well-spoken. Wife Kate is skilfully given intriguing shades and hints of depth by Charlotte Rose. Husband Deeley was somehow the least satisfying of the three portrayals, with Marc Clement often coming across as slightly too broad to really match the particular tone of this piece.

Different viewers will likely be left with different impressions of the true significance and dominant themes presented in Old Times. This reviewer was most struck by the characters’ seeming determination to live their lives actively in the past rather than the present, and their eagerness to use history – both theirs and others’ – in an attempt to ensure that they themselves are left with the largest and most powerful slice of the future. One could also interpret the possible portrait of a man fighting off a female challenger for possession of his wife’s soul – but whether he succeeds in this will not be revealed here; see for yourself.

Those who find thrills and a sense of fun in the process of putting a puzzle together should get a buzz out of visiting Old Times. If you are unfamiliar with the work and style of Harold Pinter but simply enjoy seeing a generally well-done comedy of manners, this will probably provide a challenge, but should also be a bit of tasty food-for-thought.