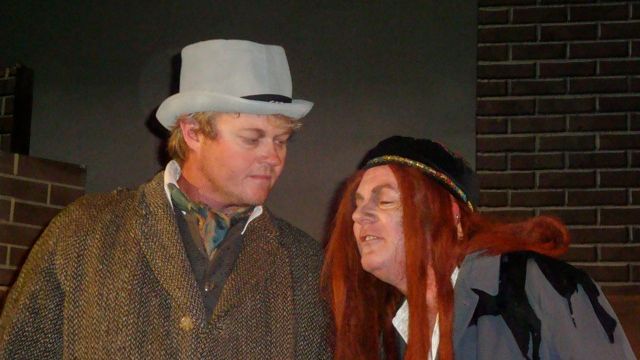 For their swansong in the theatre that has been their home for many years, Harbour Theatre chose this large cast production, with appeal to all ages, and employed perhaps their most popular directors, regular collaborators Nicola Bond and Peter Kirkwood.
Jeremy Brock’s adaptation is more faithful to the novel than the better known musical, and while it has some beautiful moments, it is extremely episodic and dauntingly lengthy. The production team, probably making the most of their last opportunity in a proscenium arch theatre for the foreseeable future, designed successive sets, for most of the play’s twenty-five scenes, meaning prolonged set changes added to the show’s length. The sets, when eventually revealed were excellent.
Apart from these impediments this was a well-directed show. There were some lovely characterisations and the use of space and height was excellent.
The children were lovely and worked well as an ensemble. I particularly enjoyed Gina Steinberg’s Charlie.
Phil Barnett was an imposing and frightening Bill Sykes, and worked well with Kim Lazarus who played Nancy.
A few Harbour Theatre regulars made farewell performances, making the most of their last opportunity in the venue including Grace Hitchen, Michael Dornan, Brian Mahoney, Norm Heath, Judy Pinnock and Jo Sterkenburg. All were impressive.
Harbour has secured new temporary residence close by and we look forward to continued success.