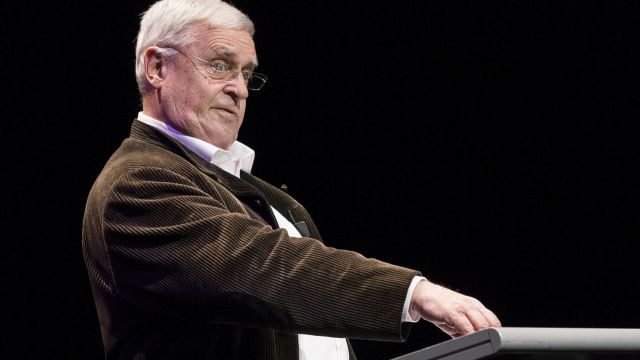 How perishable is political satire? That is the question which looms large when a master comedian revives sketches that date back more than 50 years.

The amusement depends on your age, perspective and interest in politics. For me seeing Max Gillies impersonate Sir Robert Menzies was fascinating but having not been around to see him as PM meant it sailed over my head.

On the other hand, with a connection to Bob Hawke – as a junior radio reporter when he was Prime Minister  - I was completely plugged into arrival of the ‘silver bodgie’ on stage.  It jogged long forgotten frustrations of trying to find a short grab from his speeches when he was so fond of convoluted sentences.

Once Were Leaders begins with a chat from Max Gillies explaining the challenge of political satire in the modern age. A thread which runs through the performance is that there needs to be something likable in the politician for the satire to be completely satisfying. He flashes back to mostly past leaders without changing into make up or costumes. Instead the brilliant wigs and prosthetics of the ABC make up department flash up onto the screen behind him.

He chose iconic sketches from the Gillies report which screened on ABC TV in the mid 1980’s. Unlike classic Monty Python   aficionados would struggle to recall the lines. But crystal clear are the mannerisms of the characters he revives.

The second act is more satisfying as he explains the process of impersonating political leaders. Acute observation is needed. Who would have thought that Tony Abbott and Julia Gillard have a lot in common? At least in the way they appear to chop sausages with their hands during a speech. Kevin Rudd on the other hand used his hands like a conductor of a symphony orchestra.

Sometimes art imitated life. The story about what happened when Max Gillies turned up at a function as Bob Hawke and Bob Hawke was there is a ripper.

Those with a fascination with politics will lap it up.