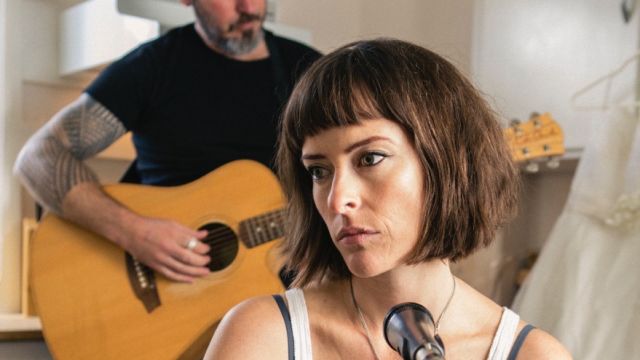 The One, written and directed by Jeffrey Jay Fowler, is both a romance and an anti-romance, a well-told story of a relationship where finding ‘the one’ may not be enough.

Strongly acted by Georgia King and Mark Storen, we follow a couple through the ups and downs of a relationship. Set on an almost bare stage, the only decoration is a wedding dress - proverbially and literally hanging over them as either a promise or a warning.

The story is alternatively conventional action and beautifully structured narration. Accompanied by Storen on guitar, who also sings, the direct address to the audience allows the audience to bond quickly with this couple, and we have a desire for them to be happy,

Both performers are excellent and they convincingly portray a relationship that is tangible and complex, in which both members of the couple are equally reasonable and likeable - which becomes increasingly problematic (and interesting) as the play progresses.

Whiskey & Boots have created a lovely and thought provoking piece of theatre, which is a pleasure to watch.