One Long Night in the Land of Nod 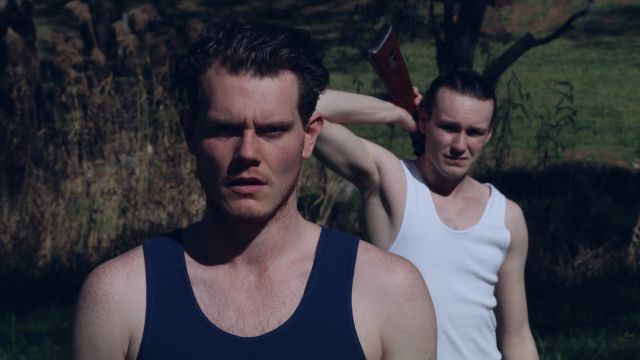 This is a tale of the world of two brothers, one named Kane. Yes, One Long Night in the Land of Nod is a show unafraid of making grand allusions – but does it live up to them?

A return by ‘city mouse’ Aaron to his family’s rural homestead brings with it a literal jolt for the live-wired Kane, an archetypal ‘Aussie bloke’ who sleeps half-upright with a gun in his lap and who padlocks his beer esky. An ensuing period of gradual acclimatisation for the two men will see revelations leave their mark, and decisions made that cannot be undone.

Angus Leighton and Michael McKechnie are a strong pair of performers, convincing enough as siblings, crafting their characterisations with a satisfying mixture of electric dynamism and restrained nuance. Their intense and claustrophobic family saga unfolds across a 70-minute run-time during which the interest level and emotional involvement tend to ebb and flow somewhat, in spite of director Marco Marando’s generally sharp pacing and skilful blocking.

In the end, what we witness during One Long Night in the Land of Nod is an accomplished presentation of a story that is competently told, while remaining somewhat generic and forgettable. For the electric chemistry that is generated by Leighton and McKechnie, this is still a show worth seeing.