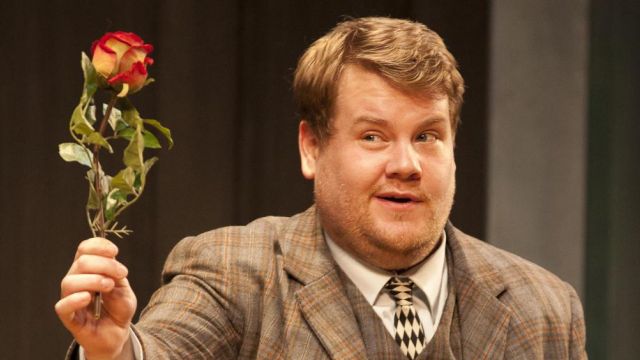 Let me say upfront that I consider James Corden is the most singularly spectacular talent to have emerged from Britain during the last twenty years. A brilliant comic actor he can do anything and make it funny, even traffic lights which he does do during his CBS “Late Late Show” when he and a group of actors perform a musical at a traffic stop when the lights are on red (his Mary Poppins is hilarious).

Corden first came to attention when he played Timms in the original production of Alan Bennett’s The History Boys and subsequently repeated it in the film. Following The History Boys, Corden co-wrote and starred for the BBC in Gavin and Stacey and was promptly proclaimed a ‘National Treasure’.

In 2011 Nicholas Hytner, who was running the National Theatre, thought it was time for Corden to return to the stage. He found the perfect project for him with an English adaptation by Richard Bean of Carlo Goldini’s 1743 play The Servant of Two Masters. Set in the faded seaside resort of Brighton in 1963, the plot follows an out-of-work skiffle player, Francis Henshall (James Corden), who manages to get himself employed by two men – Roscoe Crabbe (Jemima Roper), a gangster, and Stanley Stubbers (Oliver Chris), an upper-class twit. In a convoluted series of events, in which he discovers Roscoe Crabbe is really the gangster’s sister disguised as her dead brother, and Stanley Stubbers is hiding from the police, Henshall spends the play trying to keep both guv’nors apart and stuffing his face with food.

Written as an end-of-pier romp with touches of Benny Hill and the “Carry On” films, it’s farce of the first order. The comedy is broken up by a scene-change act, The Craze, a skiffle band led by Grant Olding, who play and sing original songs and look a bit like the mop-top four.

Corden’s Henshall is one of the funniest characters to have strutted on a stage anywhere. Whether picking a fight with himself, throwing a peanut in the air and catching it falling over backwards, or serving dinner to both guvnors simultaneously, Corden was a riot.

But it wasn’t all a one-horse show. Tom Edden as the eighty-seven-year-old waiter with the shakes, who keeps falling down the stairs and bounces back like a rubber ball, brought laughs whenever he appeared. Oliver Chris’s posh Stanley Stubbers has some brilliant one-liners, “first names are for girls and Norwegians”, and Suzie Toase’s Dolly, Henshall’s doxy, gave a Barbara Windsor-worthy performance.

National Theatre Live is streaming a differnt production free each week at its YouTube channel https://www.youtube.com/user/ntdiscovertheatre