Open for Business: The Wharf Revue 2014 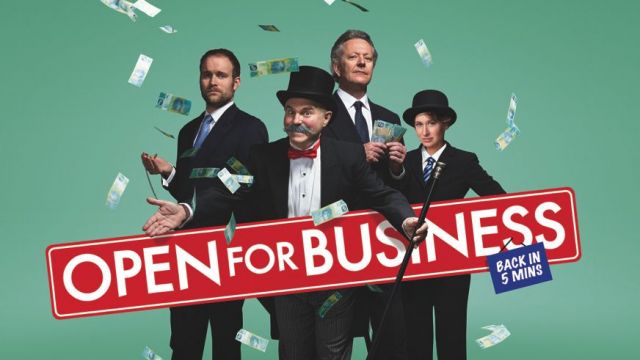 Up beamed on the TV screen Drew Forsythe in drag as Madam Speaker herself the “champion of manners.... stripped bare of party loyalty.”

We were told afterwards that many in the opening night audience are fans of Queen B.

The Wharf Revue team though do tailor their barbs depending on who is in the audience. It was no holds barred when they opened in Canberra, as the public service audience sizzled at every political nuance.

At the Glen Street Theatre some of the crudities were trimmed as they warm up for their main Sydney season.

Some of first few acts lacked punch. We giggled at Cory Bernado’s 50’s sing along to a tune from Hairspray The Musical, leading the straightest kids in town.

But there were some mangled accents in Hassan’s Heroes on Manus Island.

Momentum picked up when Christopher Pine appeared as Christopher Robin saying his prays aka Winnie the Pooh. “Bless all backbenchers ....but give James Ashby herpes.”

Clive Palmer is a satirist’s wet dream. His pups were in the locker room with Clive as coach giving them a pup pep talk.

“You block, dummy, play the man and be as offensive as possible.”

His troubled Tasmanian Senator opined that she likes someone with something between his legs, but not his stomach.

A running gag about the Abbott Government’s budget warehouse “where lowest welfare is just the beginning” began to bite.

It became side-splitting when we peered into Scott Morrison’s marital bedroom. Gags about temporary protection etc came thick and fast.

Then on waltzed George Brandis. He tickled the ivory about everyone having the right to be a bigot “to call someone a chink or Kamahl the missing link.”

He was just a warm up for the stars of the night, Jonathan Biggins as Paul Keating and Amanda Bishop as Julia Gillard.  So sublime are their impersonations that it almost makes you want to join them on stage tap dancing.

Also spot on was the Wharf Revue’s send up of “Blinky” Bill Shorten and The Greens making sure that no-one was left without being thoroughly lampooned.