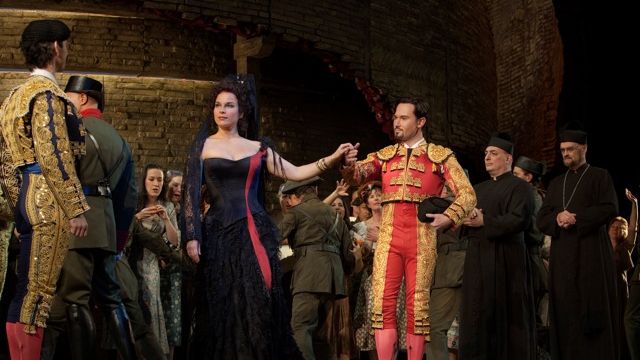 I have now seen several of the Metropolitan Opera series of films showing around Australia and this was one of the best. Arguably the most popular opera ever written, there have been millions of productions of Carmen over the years, but this was up with all of them.
As with the others in the series, there were interviews with the stars and production crew, as well as plenty of shots of the scenery being changed. Purists could find this annoying, but it was a fascinating side-show.
The Metropolitan Opera is one of the biggest opera houses in the world with one of the biggest stages and most up-to-date facilities. The sets were massive and added extra dimension to the action.
But what about the singing? Wow!
Elena Garanca was a name I hadn’t encountered before, but her Carmen was as good as any I’d seen. A tall willowy woman she wasn’t as voluptuous as some, but she did her own dancing and the voice was beautiful. I remembered I’d purchased a CD of her because it was cheap, and on the way home I listened to it for the first time, which confirmed she that has one of the most beautiful mezzo voices I’ve ever heard.
Her Jose was Roberto Alagna, one of the world’s best, and they made a creditable couple. His lack of height made it more feasible that she would leave him for the taller Toreador. Here we had the understudy, Teddy Tahu Rhodes, one of the stars of Opera Australia. He looked good and acted well, but the voice was a bit tight.
The Michaela, Barbara Frittoli, was older, but still looked good and sang beautifully. Other voices were also first rate, as was the orchestra and chorus.
An excellent night at the opera.