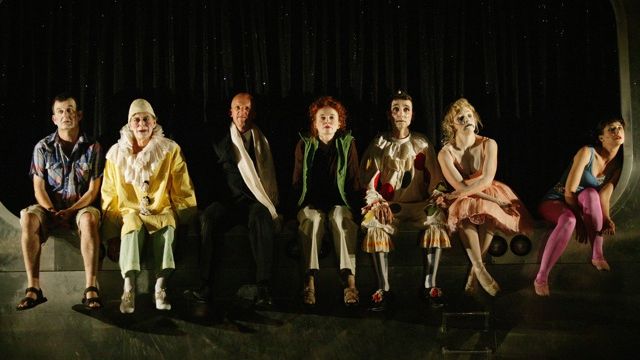 Kantor’s production delivers hilarity amidst the darkest of circumstances. But does the balance swing just a little too far? Optimism entertains uproariously, but does its broad comedy overwhelm Voltaire’s satire?

Comic Frank Woodley (Lano and Woodley) portrays the hero, Candide, as a kind of wide-eyed, sad-sack clown, with excursions into stand-up. Despite disaster upon calamity, Candide passionately adheres to the philosophy of Optimism, espoused by his tutor Pangloss (Barry Otto). When Woodley breaks the fourth wall there’s a risk - Candide seems to have left the stage for Woodley to launch into stand-up.

Barry Otto is a fantastical, clownish tutor, maintaining his unshakable, simplistic belief despite repeated catastrophes. He is just one of a committed acting ensemble totally in synch with Kantor’s high energy, frenetic vision.

Optimism is surreal, visually entrancing and disturbing, courtesy of Anna Tregloan’s costume and set designs, in interaction with Paul Jackson’s lighting. The use of plastic sheeting and large electric fans should be seen, not described. The dominating aircraft fuselage anchors the production in a contemporary context.

George S. Kaufman is famously quoted as saying ‘Satire is what closes on Saturday night.’

Vibrant, brimming with wit, and a visual treat, just how well Optimism actually satisfies in service of Voltaire’s satire is another question.

Opera in the Domain audiences will experience an alternate stage incarnation of Voltaire’s Candide, a star-studded concert performance of the admired, flawed, frequently revised Bernstein musical / opera at the end of January.