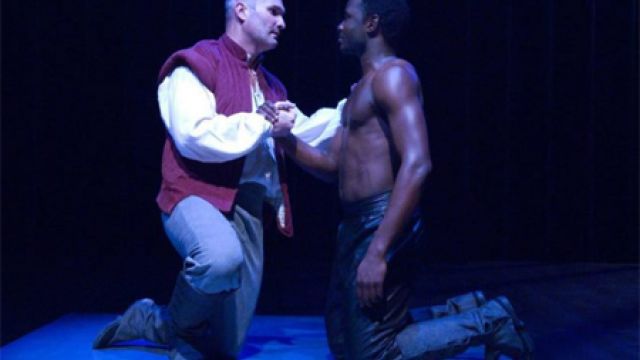 The cast of Independent Theatre’s Othello have done an excellent job with one of Shakespeare’s most popular works. Each of the players delivers their Shakespearian prose clearly and with understanding.

Right from your arrival in the theatre, there is a great feeling about this production. Looking at the un-occupied set, designed by Rob Crosser and David Roach, great levels had already been achieved. Consisting of a raked central stage, with built in rostra which later doubled as a bed, the rake is flanked by two piers jutting out towards the audience. Joined across the back and framed in chromed bars to delineate space and represent both freedom and constraint the set is symmetrical in detail all except for the offset bed rostra which is relaxing to the eye in its location.

The real success in this production comes in the placement of the action on the set. Many stagnant crowd scenes have been beautifully blocked and both the hierarchy of the characters and their locations in the space have been carefully considered to enhance the scripting.

In the title role of Othello, Shedrick Yarkpai is excellent. He has a contemporary understanding of his role, and approaches Othello as a noble and generous man, perhaps slightly lacking in the public insecurity with which that character is often interpreted. Nicholas Bishop is the standout performer with his characterisation of Iago. It is evident that Bishop knows exactly what Iago is doing and saying at every turn, and his portrayal makes it clear for the audience too. Kate Englefield does a great job as Desdemona, taking a little while warm up to her part, she eventually gives us a very passionate and loving performance which comes to a savage and bitter end.

As Cassio, Andre Vafiadis is occasionally too quiet and a little nondescript. As the lieutenant who received the promotion Iago was overlooked for, more conviction and arrogance was expected. Nicolas Ely as Roderigo was splendid, his portrayal was effective in that it did not trivialise the weaknesses in his character. Ely successfully underplayed the role without overplaying the comedy.

The rest of the ensemble created a great mood in the show, and there were no small parts. The main criticism goes to the creation of levels in the vocal depiction of the show. At interval an audience member commented that there had been a lot of shouting in the first half. Shakespeare’s writing is passionate and often represented with anger and rage. More focus on the highs and the lows in some scenes and really holding back before reaching the height of conflict in others would have added an extra dimension to this production.

There were a few odd audio effects interspersed throughout, which felt a little incomplete. Perhaps time constraints had impacted here, but more detail could have made the sounds more inclusive and less obviously tacked on.

All things considered it was an excellent show, albeit a long one. At three hours plus interval, you should bunker down for a night in with the Bard, one you are sure to enjoy when you are in the company of this Independent Theatre cast.