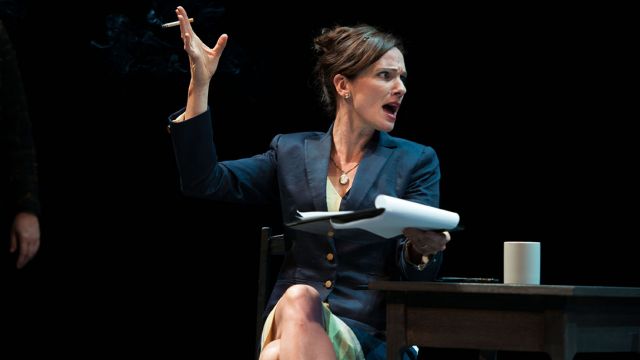 McClements is a real tour de force.  Although an actor easily recognized for her extensive television work, she displays wonderful strength and ability on the large Playhouse stage where she is able to ‘turn on a pin’ emotionally and psychologically.  Her relationship to the audience is challenging as a presenter and narrator (albeit unreliable) and participant in two other narratives, one legitimate and one, a fictionalized construct. 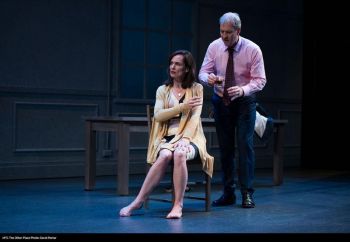 Sound (Russell Goldsmith with composition by Paul Grabowsky) is used unconventionally to enrich the atmosphere and at times, ambiguously, echoes the shifts in Juliana’s destabilizing mind.

There are several laments in this work.  The loss of a child is a haunting theme but not the crux of the work.  At the heart of the writing is the curvy flow of the changing realities, understandings and perceptions of Juliana’s brain that makes it such a rich and rewarding piece.

David Roberts as Ian, Juliana’s longsuffering husband, initially portrayed through the eyes of his wife, as a self centered adulterer, towards the end of the play sits on stage - a man reduced by the weight of the burden of loving a woman who is no longer the one he married.

Clever, poignant and moving, The Other Place is solid satisfying theatre!