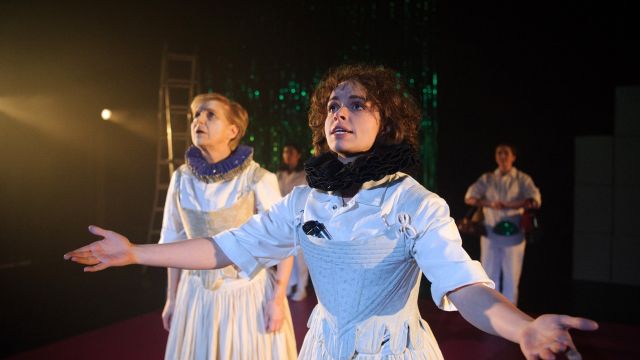 Betty Burstall founded the La Mama Theatre in Carlton back in 1967; eight years later Buzz Goodbody founded The Other Place theatre in Stratford–upon-Avon.

The Other Place is a study of two women who rise to the challenge of developing theatre outside of the male dominated mainstream. Christopher Bryant has written a poignant historical and postmodern account of a polemical era and Jessica Dick’s direction brings his vision to life, offering the audience a unique meta-theatrical experience.

An ensemble cast of five women (Susie Sparks, Ravenna Bouckaert, Kristina Benton, Erin Pattison, Vivian Nguyen) weave themselves in and out of the multilayered stories, sometimes addressing the audience like a Greek chorus; all equally known as the “Company”, they wear iconic overalls, symbolic of the feminist protest movement of the seventies.

Buzz Goodbody was only 28 when she took her own life, sending shock waves across the theatre world. Her legacy remains, as she was the first female director at the Royal Shakespeare Company, and, dissatisfied with her ”high falutin” position, she decided to create and agitate for a space that was intimate, affordable and could house low key Shakespeare productions. Burstall spent time in New York visiting the original La Mama Theatre and frequenting the small coffee houses staging intimate shows, subsequently returning to Melbourne charged with inspiration and determined to fight the sexist funding bodies for a similar, much needed venue for local playwrights to stage their own works

There’s reflections on eras and styles beginning with the Elizabethan period, where female actors were non-existent and theatre was an affordable and accessible form of popular entertainment. The Other Place shifts into other paradigms with Goodbody taking centre stage; a hard-driven communist, she was determined to bring Shakespeare back to the people.

Bryant has written a piece of theatre that is as rich and textured in language as it is in ideas and historical facts. While Dicks has created an eclectic production that sheds light on this erudite and complex play, given its strengths l feel it does need to cut back on the over emphasis.

The sound design (Joshua Bliss) is poignantly cataclysmic and discordant, the set design (Ella Butler) reflects on the idea of affordable independent theatre and lightning design (John Collopy) is an erratic blend of neon brightness and brooding effects.