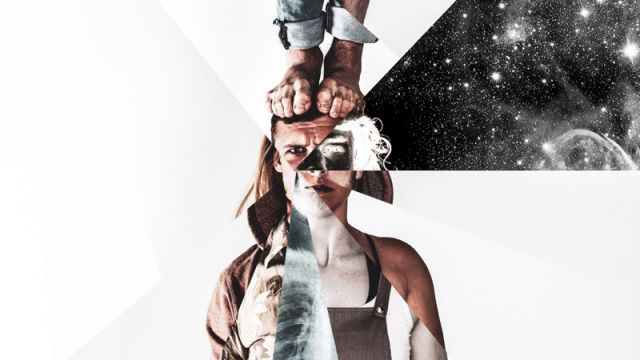 Gravity & Other Myths explore order and chaos with their new show, grounded in theatre, but soaring in acrobatics, contemporary dance and movement that defies definition.

Disorder and a stage full of microphone stands seems an unlikely setting for seemingly impossible movements that rely on precision. One by one, the performers come onto the stage and begin to talk into a microphone, speaking their random thoughts out loud, over the top of each other, until we’re assaulted by a cacophony of brainwaves. They’re barely lit; it’s hard to see what’s going on – then a man in tuxedo tails strides forward, armed with a tablet to control the sound and light, and cuts both. He wanders the stage with a torch, illuminating incredible contortions formed in the darkness. There is a deep, distorted ethnic beat, and the conductor adds his ethereal voice.

It’s a mysterious start, the torchlight theme multiplying with each performer walking, rushing around the stage, set for a spectacular reveal. It comes, eventually, but our senses have a too-detailed idea of chaos by the time it does.

Gravity & Other Myths is an Adelaide success story: formed ten years ago, they have re-defined contemporary circus in Australia. When this group stormed the Adelaide Fringe many years ago with A Simple Truth, they were a group of larrikins, performing their acrobatics competitively and making the impossible look easy across a plain stage.

They’ve grown up a lot more with Out of Chaos... There’s a much richer context to their fluid movements: in episodic narratives (with some obscurity); in costumes that look wholly unsuitable for the motion they’re put through; and in superb lighting that is controlled and constructed by the performers during the show – each of them twisting and turning on each other’s shoulders to lift the lights to their holders high above the stage.

Yet they still preserve the camaraderie and cheekiness from their more stripped-back pieces – when the conductor passes the microphone around after a particularly exhausting set, their spoken thoughts are of sweat from the other performers, their favourite bit of the routine, or the realisation they’ve gone off stage too early.

Director Darcy Grant, designer Geoff Cobham and composer Ekrem Phoenix have constructed context for this physical theatre, and the nine performers on stage are incredibly talented. The graceful agility and impossibility of their dance; the balance in shaping three acrobats high above a fourth in stunning aesthetics and strength; and the falls that seem destined for tragedy yet flourish a last second recovery.

But this is also its challenge in balancing the impressive physical feats with the desire to tell a story: the bodies don’t miss a step; the narrative sometimes does. Whilst it’s clearly necessary to catch breath between the phenomenal jumps and throwing each other around the stage, this diminishes the pace from frenetic to fade, and it can be too extreme.

Yet the real and unique character of each of the performers still shines through; they’re wonderfully disarming throughout, and this is a brilliant piece of contemporary circus from this home-grown group.