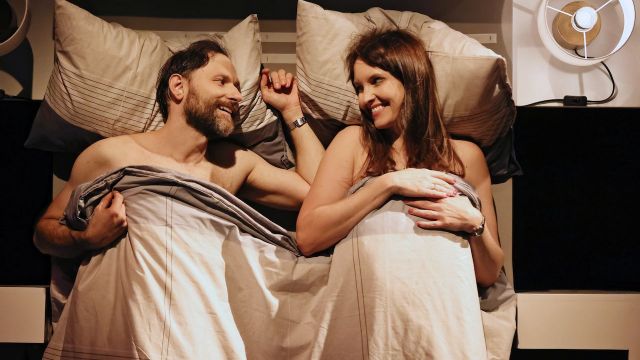 The premise of Outdated is delicious. Two 40 something adults, damaged by being dumped by their long-time partners, get back in the saddle of dating by signing up to an introduction app.

The cosy Ensemble stage is groovily decked out by designer Simon Greer with an AV screen, that was lit up with texts and emojis providing a running commentary, on a set with a colour scheme that evoked an episode of the TV series Perfect Match.

The compatibility rating of the couple Olivia and Matt – as Dexter would put it – appeared at first to be on the low side. Whilst there is a spark of physical attraction the couple struggle to connect.

Writer and Director Mark Kilmurry allowed the characters to relay their inner thoughts in between their dialogue. We hear the lonely hearts scold themselves for saying the wrong thing or reveal their thoughts in a second-by-second commentary of how their date is performing.

The audience was both laughing at the frequent one-liners and cringing at the courtship disasters. The first date at a restaurant is almost like an episode of Mr Bean. Hats off to the excellent actors Rachel Gordon and Yalin Ozucelik for keeping the pace and gags flowing as the relationship gets off to a rocky start and a little bit of repetition in the script.

The audience was having a good time, but it wasn’t until the couple meet by accident and reveal a bit of their backstory, that we started to feel warmth towards the characters.

The introduction of music, physical comedy and some hilarious choreography in a vertical bed was a much-needed tonic.

In my day (before marriage last century) asking someone out was about looking up their phone number in the white pages and ringing their landline – hoping to avoid speaking to a relative, or flat-mate when someone picked up the phone.

The 21 century way of dating might use different technology but the nuts and bolts (pardon the pun) of starting a relationship are still the same and are as always ripe for comedy.