Over The River and Through The Woods 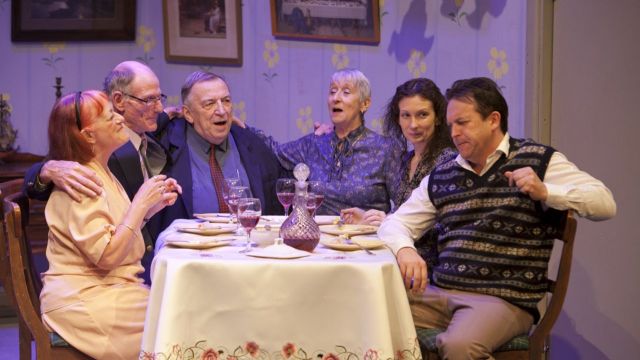 In his programme notes, Director Dexter Bourke says, “Theatre is much more than a reflection of life, for me it is life itself, allowing ourselves to be more of ourselves than we would normally be.” It is with this understanding that he gives us a wonderful, funny and poignant production with a stellar cast who have a combined total of more than 350 years (by my calculations) of life experience, which they share lovingly with the audience.

DiPietro’s gentle comedy also packs an emotional punch and it’s rare indeed that we see four “old” characters – two sets of grandparents – portrayed with such individuality and emotional depth. That’s a tribute to the writer, but also to the director and the actors themselves. Not one of them is a stereotype, though all are recognisable, and each one touches us in a different way.

The story of loving Grandson Nick, who has put his life on hold for far too long for “Family”, is one we have all encountered in some form. With the rest of the family having moved away, Nick is the sole solace of both his sets of grandparents, and he spends every Sunday eating with them. When he tells them he has a job on the other side of the country, they pull out the stops to make him stay, including setting him up with a girl. Eventually they let him go, selflessly refusing to use the trump card which would make him stay.

The cast is superb. As Frank, the laconic old Italian who hammers the message of family first, octogenarian Nick Martin is so real that after the first 10 minutes you forget completely he is playing a role. German born Martin (who actually worked with “Bert” Brecht on the 1949 East Berlin production of Mother Courage…that’s 65 years ago!) completely embodies the migrant who built a house from the ground up for his one and only love. He is wickedly funny when confronted with his driving, and wonderfully poignant as he recalls his own less than perfect relationship with his father, and – when stumbling over the odd line on opening night – manages to convince us that it is Frank’s memory going, not his own. Nick says this may be his Swansong…if so, it was a privilege to witness it.

Valerie Mitchelmore brings warmth and depth to Frank’s wife Aida, a woman who solves everything with food and still loves her husband after 60 years. Her closing speech, where she explains why she cannot ever leave the house Frank built for her, even though everyone has gone, had the audience reaching for their hankies or tissues. Tall and lanky Howard Proctor is Nunzio, Nick’s other grandfather. While his American accent was soon discarded, Proctor made up for it with several scenes of the highest order as a man dying of cancer who refuses to reveal the truth that would make his Grandson stay. It’s a beautifully measured performance which builds perfectly to the last goodbye, shattering us completely as he clings to his grandson, tears welling in his eyes; honest acting that could not be faulted.

Jackie Hutchison is Emma…with her dyed hot flame hair, her “ageless” fashion style, and her pro-active approach to life. She’s the perfect take on the grandmother who refuses to grow old or conform; another delightful performance full of vitality and truth.

If I have spent most of this review singing the praises of these four “elderly” actors, it is because I have so much respect and admiration for them, and the whole ethos of Community Theatre which allows actors to do what they love best, well past their “use-by date” in other circumstances.

Leading character Nick is beautifully played by Ian Johnson, current Chairman of 1812. His strong stage presence, beautiful comic timing, and real warmth make him the perfect foil for the scheming oldies. I look forward to seeing him again.

Becky Lee (Caitlin) is totally convincing as the slightly desperate 30 something spinster the “oldies” have earmarked for Nick, who nevertheless maintains her standards and her dignity.

Director Bourke has not only brought out the best in his cast, he has choreographed the whole production beautifully and even such things as real food on the table for dinner, which the cast actually eats, and the crumbs and powdered sugar flying from the munched-on Cannoli, convince us that we are actually in that house (designed by Patrick Loverso and built by 1812 members) and not a theatre …the soundscape by Robin Le Blond (he also did the lighting design), complete with Sinatra favourites completes the illusion perfectly.

This is Community Theatre of the highest order. Some critics may find the play over-sentimental, but it’s a play with real heart and genuine affection, presented here by a team that puts its heart – and soul – on the line. A wonderful night capped off with the customary 1812 supper and champagne.