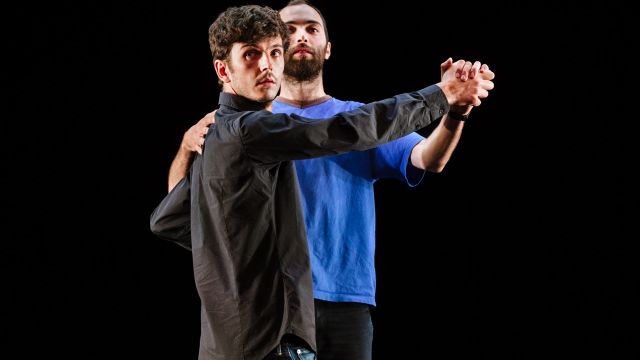 On a bare open stage with just two chairs and two china plates, one broken the other not, two actors enter – Bertrand Lesca and Nasi Voutas. Nasi takes a square skateboard and stands centre stage, like a frozen statue gazing blankly at the audience. He suddenly notices that the china plate next to Bertrand’s chair is broken. Who broke it? No one knows, but Nasi is a bit mischievous and dutifully clears up the mess and resumes his position. Bertrand then puts on a version of “Paingero” from Handel’s Julius Caesar and dances with Nasi, eventually getting his own skateboard, and the two fly across the stage to the ravishing music and to the delight of the audience.

Things start to get a bit boisterous with the two starting to crash into each other, perhaps deliberately but it all still seems rather fun. Then Bertrand goes and brings on a tall ladder, asks to borrow Nasi’s unbroken plate, climbs to the top of the ladder and drops the plate, which smashes into pieces. He starts to clear it up, beginning to appeal to the audience with Gallic charm and reason about the difficulty of working with his partner. Meanwhile, Nasi has got a hammer–and uses it.

This incident marks the beginning of the horrific descent into mutual violence towards one another that results in devastating destruction and ruin that leaves the audience completely stunned. The above rather lengthy description gives only hint of this highly complex yet theatrically simple, and extremely rewarding piece of political theatre.

The title refers to the ancient town of Palmyra that used to exist in the rubble that is now Syria. Whilst this engaging and completely enthralling piece of political theatre may be taken as a metaphor for the current Syrian Civil War, nonetheless, it has a much larger context, especially in a post-colonial country such as modern Australia.

In this context, Bertrand represents cultured and articulate European imperialism, whilst Nasi represents uncultured and inarticulate everybody else. This is driven home when Bertrand attempts to woo over the audience with invitations to Paris, visits to all the wonderful art museums, as well as singing a French song and referring to some of the great French writers such as Baudelaire. In the meantime, Nasi sits isolated up the back in the middle of a pile of rubbish, being mocked and ridiculed as the undesirable ignoramus in the corner.

The trouble Bertrand faces, however, in dealing with an Australian audience, is that they are also not necessarily familiar with his cultural references, although a few did speak up affirming their knowledge. most, however, did not. Furthermore, when Bertrand uses this so-called cultural sophistication to say to his partner ‘You see, nobody wants you here’, there was also a damning virtual silence from the audience. A couple cried out, ‘That’s not true!’ (including this reviewer), which compelled Bertrand to say, ‘Most of the audience don’t want you here’. The damage, however, had been done. By its very silence the audience was complicit in favouring European imperialism over ‘the other’. Ironically, however, in this instance, we have more in common with ‘the other’ than not.

The play, however, is not over yet, and in a brilliant conclusion scene that pokes fun at modern ‘follow-up’ sessions, with the articulate Bertrand sounding like a contemporary moderator (‘So, tell me Nasi, how do you think you went tonight?’ etc), Nasi finally has his revenge. The final image is of Nasi, having cleared a space in the rubble across the entire stage, spins around and around and around on his skateboard to the song ‘’What Would I Do Without You?’ There is deliberate and brilliant ambiguity in this ending. You can make of it as you will – but it is still sinisterly nihilistic and quite insane. Arts Festivals, such as the Adelaide Festival, are wonderful in presenting confronting, challenging and brilliant international theatre works – such as Palmyra.

Bertrand Lesca and Nasi Voutas are truly extraordinary in their inventiveness, power and influence over an audience. I was sitting amongst of group of very vocal young people who initially giggled at everything, including the violence. After being complimented and charmed, or rather, deliberately flattered and manipulated by Bertrand Lesca, their mood significantly changed when he dismissed them collectively as ‘the prom’. A lesson learnt. This was a clever as well as brave act, as was Nasi Voutas’ subversive appeal, despite his blatant physical violence.

As revealed in this play, we are vulnerable to both, and both are equally destructive to the extreme.