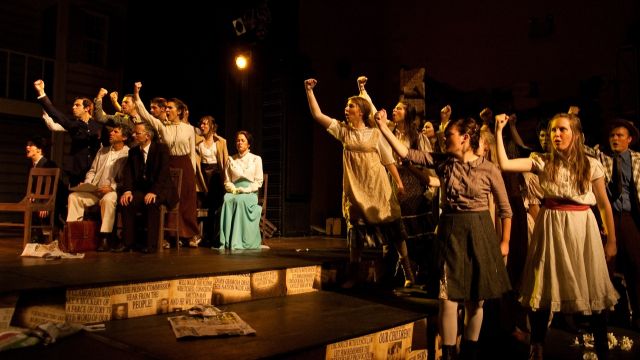 Community Theatre is at its best when it introduces a new work into a city, which professional theatre is unlikely to try, and does it very well.
Such was the case with The (Rockdale) Regals' production of the fascinating and beautiful musical Parade. It won the Tony Award for Best Musical in 1999, but has never been seen in Sydney.
Parade is about the story of Leo Frank. He was a Jewish pencil factory owner in Atlanta Georgia, who in 1913 was wrongfully accused and convicted of the murder of a thirteen-year-old girl.
Without a mature actor in the lead this musical would fail. The Regals were blessed to find David Valks. Trained in London, with some West End experience, he played the awkward businessman with a deft hand. He looked the part, sang sweetly, and skilfully portrayed his character as he developed from a bundle of nerves to a mature defiance as his fate is sealed.
Other standouts were David Russell as the slick talking and corrupt prosecutor Hugh Dorsey and Monique Salle as the innocent 13 year old victim, Mary Phagan.
Local media played a significant part in the unfair trial of Leo Frank. The Regal's illustrated this by projecting many of the anti-semitic newspaper headlines of the time.
It was a shame that the enormous effort that went into this was not maximised by the set design, as the clarity of these projections was sometimes obscured by the impressive set.
Choreography too played a big role in portraying the dark themes of this musical. It generally worked, but at times was a little blunt for my liking.
Musically Parade was also strong.
For an opening night of a community theatre production, the orchestra and cast were exceptionally sharp.
This production is well worth a look in what is a very moving evening.
David Spicer.