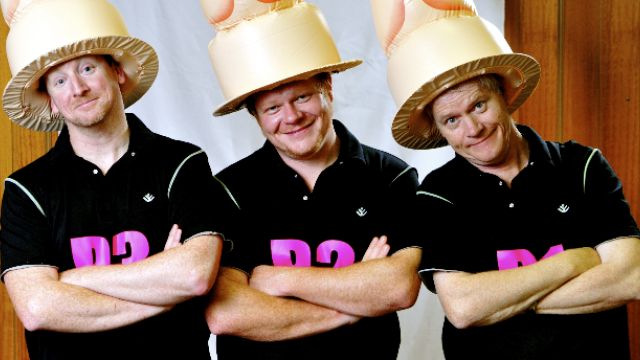 The latest production from Producer / Director Matt Byrne, The Penis Principles, is a fast-paced and hilariously low-brow journey into the issues plaguing modern man. The three-man cabaret comedy stars the director himself and tackles both the silly and the serious, in a night of genital fact and farcicality.
Like its female equivalents Busting Out and The Vagina Monologues, it is designed to have you both listening and laughing. It achieves this impeccably. Despite some predictable inclusions, the puns are non-stop and clever. With a mix of informative “penis pointers”, musical numbers and comedic skits, it is Byrne’s witty lyrics put to well-known tunes that has the audience clutching its collective side. Accompanying all is an amusing range of phallic props.
In the imitate setting of Maxims Wine Bar, the seating was very tight but this did not seem to affect the audience’s enthusiasm. Byrne gave a solid performance, though was at times outshone by his highly talented cast mates in Kim Clark and Rohan Watts, particularly in strength of voice. As a trio they are guaranteed to bring a smile to the most conservative of faces.
Intensely funny and well-written, this is a show for both men and women, young and old. Byrne is to be commended for delving into the more serious issues of mental and prostate health as well as hitting the easy targets. The jokes shoot from the hip but the take-home message comes from the heart - this show will get you thinking as you giggle and gasp for air.
Nicole Russo