Pennies from Kevin - The Wharf Revue - On Tour 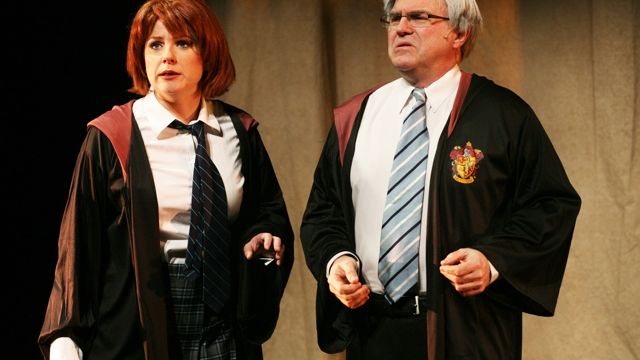 For too long Sydney has had this snappy, happy, irreverent entertainment to itself. At last, thanks to the many tour sponsors, people outside the Emerald City are allowed to share the unbridled political satire.
Regular creative team, Jonathan Biggins, Drew Forsythe and Phillip Scott have honed their collective wordsmithing talents to prickle-point accuracy and topicality.
The fourth regular cast member, Virginia Gay, was laid low by some accursed wog so Amanda Bishop was flown in, rehearsed intensively, and dropped into the vortex. She acquitted herself admirably.
She carried the opening musical solo with aplomb, and if she resorted occasionally to cheat sheets in sketches and other songs, her animated performance disguised it admirably.
As an audience we were stunned by the vocal agility of all performers to capture the catch phrases, exact vocal placement and delivery of the characters being lampooned. Repeatedly, opening lines were lost in audience applause and laughter at the instant recognition. (I’m not complaining, merely acknowledging the players’ vocal expertise.)
Kevin Rudd, Little Johnnie Howard, Keating, Gough Whitlam, Nick Zenophon, Bob Brown, Julia Gillard, Amanda Vanstone, Tony Fitzgerald, Peter Garrett, Bob Ellis … so many flitted in, left their mark and flew out.
The burgeoning refugee problem, national broadband installation, weasel words, insulation problems, the Murray-Darling problem, the Pope, St Mary McKillop − nothing was sacred. The laughs just kept coming.
The house was full, and I understand the bookings are heavy for the matinee and evening performance to come. This show deserves it.
Jay McKee

The Wharf Review began with another bullseye from the team which has been making people laugh now for a decade.
"Howard days are here again as refugees appear again. And interest rates career again. Howard days are here again."
Their political impersonations were fantastic.
At last Kevin Rudd has given them enough material to work with. The Prime Minister's style of delivering glib one-liners in a robotic fashion is a juicy target for satirists.
Johnathan Biggins brought out a classic Gough Whitlam from the archive to coach young Kevin about spending money.
Drew Fortsythe didn't have to work hard to get laughs from impersonating Godwin Gretch. He already looks like a strange character from a Harry Potter movie.
And thank heavens Amanda Vanstone is still eating her way around Rome. I suspect there will be a diplomatic protest of the highest order from the Wharf Review team if she is recalled.
All was going swimmingly when the laughs came to an abrupt and rude halt when the Wharf Review turned their sights on the Israeli-Palestinian conflict.
To the music of Tradition from Fiddler on the Roof, they focused on the recent cases of Palestinian families being evicted from their homes by Israelis in East Jerusalem.
While the target for satire was legitimate, the execution was poor. The sketch was not funny and the portrayal of rich American Jewish donors had the feel of anti-Semitism.
The Wharf Review was just as unkind to Hamas, and Johnathan Biggins was also very cruel to the Pope and his time in the Hitler Youth. But the Pope's sketch was very funny. In the end humour is king.
Just like the Chasers need to have someone run an eye of their material, so too should the Wharf Review.
The public, though, loves them. The season has been extended and this edition will tour regionally.