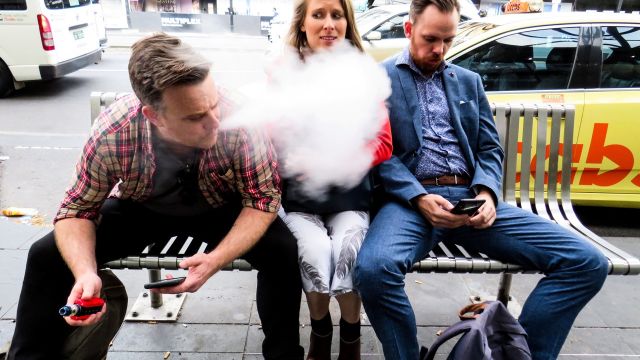 People Suck is an in-your-face indie “musical airing of grievances”. It is written by a Canadian team Megan Phillips and Peter Cavell (winners of the Best Toronto Fringe) and brought to Australian audiences by the Melbourne based Salty Theatre company.

Five rambunctious, talented singers grace the stage with comical material, or should l say a rude – crude song list that has the  audience simultaneously laughing and cringing. Hard to fathom but it is true – the show begins with Ashley Taylor, a primary school teacher, conducting her class in the first song off the rank “Today’s Lesson”, teaching how to be an “arsehole”. The entire cast also includes Belinda Jenkins, Tim Lancaster, Georgie Potter and Ashley Weidner, who embrace their early years through the rule of thumb lessons of how to shine your way through life.

People suck for millions of reasons and being stood up by your boyfriend might be just another reason to feel ‘ratshit’, or just another day at work in “Office Drama”, sung by the entire cast, off-loading their battered egos and their fear and loathing of the human race. 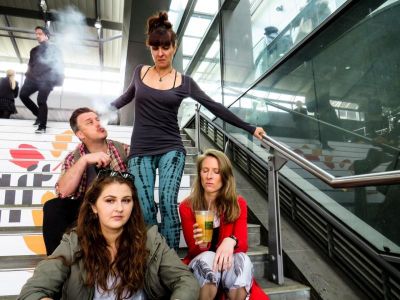 There is no stopping Belinda Jenkin in her rip-roaring burlesque performance in “People Suck”, as she stakes her right to claim cunninglingus. The entire cast poke fun at religion in “My God”, while there are comparative philosophical ideals sung in “When The Revolution Comes”, during annoying tram delays, and Ashley Taylor has your eyes welling with tears in “I Don’t Know What To Say”.

There is a loose narrative that strings the songs together, but the overall theme is about survival and how to endure the  intolerable human race. The songs are clever, witty, occasionally heart-wrenching and most of the time blunt and offensive, pumped by a versatile team of hard and punchy entertainers.

People Suck is a left of field musical, and rightly positioned in the independent theatre scene. This is an entertaining ninety-minute show with Geoffrey Scarlett on keyboards and direction by Sarahlouise Younger. It’s a  wonderful exploration of human fallacy with a little ray of hope thrown in for good measure.