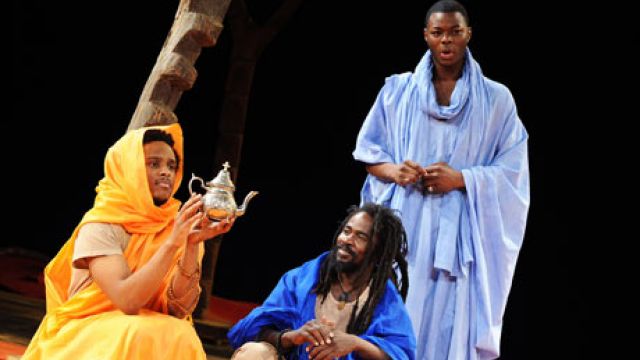 The full stage of the Sydney Theatre. A large orange rug. A small patch of sand. Two stylised tree trunks on wheels, three stumps and a few branches. And downstage left, a variety of instruments.
In essence, a Brook stage.
In 11 and 12, Peter Brook has used this simple but evocative setting to take the story of Tierno Bokar – a Sufi master from a small African community – to the world. And fortunately, to Sydney, the only city in Australia where it will be performed.
With a company of 7 actors, playing a complex variety of roles, and Toshi Tsuchitori, the Japanese musician who has been working with Brook’s theatre group since 1976, Brook, and chronicler of Bokar’s life, writer Amadou Hampaté Bâ, have created a compelling piece of theatre about religion and politics from the past, that rings a clear message to the world today.
Essentially a narrative drama, 11 and 12 takes its audience from simple African village life to French colonial imperialism, with the action moving from the quiet, contemplation of religious discussion to misunderstanding, confusion and, eventually, conflict.
Haunting musical notes and resonating percussion are as much part of the production as the action itself. As the actors move – with simple changes in the way a piece of fabric is worn or the addition of a piece of costume – to portray story teller, student, teacher, guard, soldier, governor, mother, wife, Tsuchitori’s deft and sensitive music transports the audience with them. Together they take us across Africa, through oppression and conflict, until they leave us, in silence, in the cemetery where Bokar’s body lies.
The gentle, yet resonating, messages throughout the text explain why Brook and Marie-Hélène Estienne chose to adapt Hampaté Bâ’s work for the stage. There is telling simplicity in the opening soliloquy: “ … with my own eyes I saw this (prayer)bead grow larger and larger ‘til it became a bomb”. And in Bokar’s quiet responses to his pupils’ questions - “there are three truths, my truth, your truth, and the truth”, “God id the embarrassment of the human mind because … He is beyond definition”.
Carol Wimmer