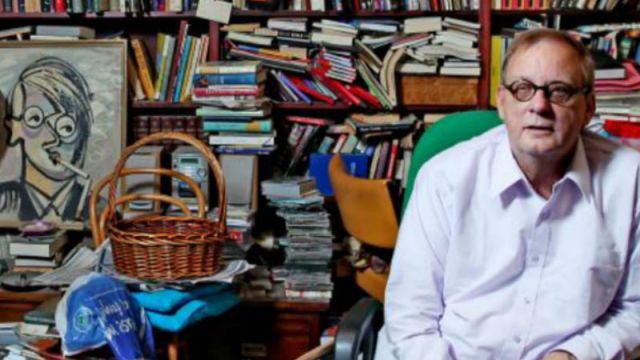 Peter Goers has had a career in entertainment spanning more than 40 years. From actor and director, to theatre critic, television presenter (briefly and not lucratively), followed by a long and happily ongoing career on radio.

He is a familiar face (and voice) throughout South Australia and clearly has a throng of adoring fans, with many regular listeners of his ABC Radio Show which is broadcast nightly across SA and Broken Hill.

The show gets off with a bang, fully clothed of course, as Goers is assisted from the floor by the incomparable Anne Wills, local sweetheart and Goers’ Assistant Stage Manager, possibly the most lauded at the Fringe, being the recipient of an astounding 19 Logie Awards.

Of course Goers is on the floor because “he’s had a fall” which is only something that happens after turning 60, prior to which we simply “fall over”. This incredibly funny bit of physical theatre shtick well and truly gets the audience in the mood for what they came for, inimitable Goers.

Goers is a master storyteller and owns the modestly dressed stage for the full 60 plus minutes of the show.  He takes us on a global journey from Coober Pedy to Cuba, Broken Hill to Istanbul, rarely missing a beat and always bringing the local characters to life. It is frequently a nostalgic pilgrimage to a simpler time. A time of local hall dances, drive-in movies, debutante balls and double-cut rolls, with not a baguette or a café latte in sight.

He regales and amuses with a bevy of show-biz anecdotes gathered over his career experiences, including about the world-famous Ethel Merman, but he doesn’t forget the not so well known, but equally as important, such as Colin Ballantyne. That may not be a name known to many, but without him the State Theatre Company of South Australia may not have come into being.

In the words of Barry Humphries (yes, there are stories about him too), this is “a nice night’s entertainment”, albeit in the afternoon to allow for an early night. A fast-paced, funny, sometimes poignant, journey through the mind of a man who, like many, has faced both tragedy and good fortune. His empathy for humankind and his love for this wide brown land shapes his monologue and lends a quaintly patriotic feel to the show.

This is the third in a series of Fringe shows that Goers has been performing since 2016. It was a full house, and a very happy one, at the show I attended. With only a week to go, get in quickly if you don’t want to miss out.