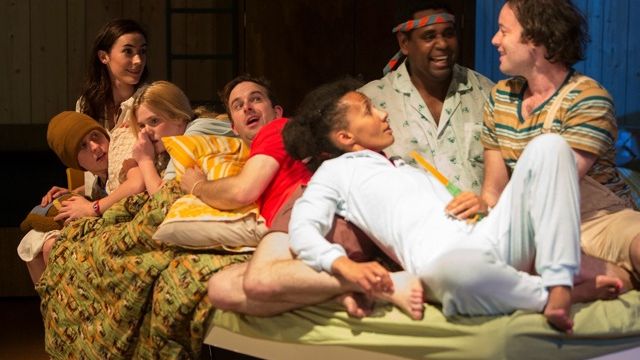 The first thing that crossed my mind was how are they going to fly and where will the Pirate ship come from?  The Belvoir Street Theatre was once a tomato sauce factory and has never been converted into a regular theatre with curtains and proscenium.

The bedroom of Wendy, Michael and John was the one and only set for this production.

On the shelves were board games with no electronic gadgetry in sight (This was the way bedrooms looked like when I was a lad). But how could this be turned into the backdrop for the adventures of Peter Pan?

Without giving too much away about the clever stagecraft, I can report that the flying was cute and safe to try at home, a double bunk makes a splendid Pirate Ship and diving onto a mattress is not quite as frightening as leaping into the jaws of a crocodile. 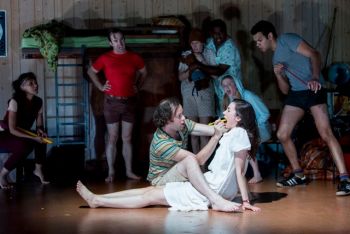 The set combines nicely with the elegant simplicity of the script adaptation by Tommy Murphy. It avoids the,at times, painful updates we’ve seen of late, lasting just one hour and twenty minutes, makes this production an excellent way to open the imagination of young theatregoers.

The casting of an indigenous actor, Meyne Wyatt, as Peter Pan worked nicely. It gave us the flavour of the dreamtime in the performance but Tommy Murphy avoided making any direct reference to it.

Geraldine Hakewill, as Wendy, elegantly fed the emerging subtle sexual tension between her character and Peter Pan, while Charlie Garber as Mr Darling and Captain Hook was so charming we winced at the prospect of him walking the plank.

The tradition of pantomime has long faded in Australia, let’s hope Belvoir can help resuscitate it.