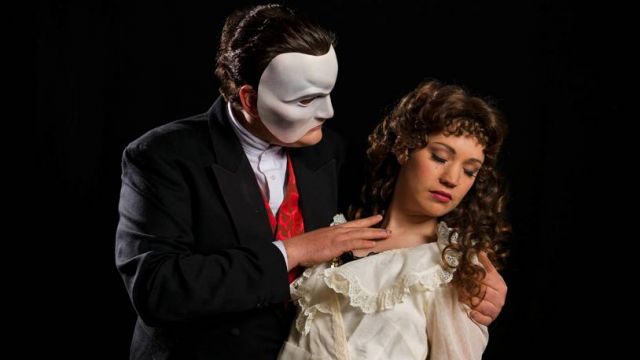 Sherryl-Ann Secomb’s production of The Phantom of the Opera for Ipswich Musical Theatre was musically solid, spectacular to look at, and highly melodramatic.

Star of the performance was Lauren Lee Innis-Youren as Christine. With a bright and clear soprano she effortlessly handled the demanding score with ease and was particularly pleasing on “Wishing you were Somehow Here Again.”

Robert Shearer in the title role had the musical chops to do it justice but missed the emotion of this tortured character. But, it’s a showy part and the audience loved him, especially in his big number “The Music of the Night” which Lloyd Webber ‘borrowed’ from Puccini’s The Golden Girl of the West.

The role of Raoul has always been a bit wimpy and even though Philip Enculescu brought a refreshing strength to it, he found himself vocally outclassed by his co-stars. 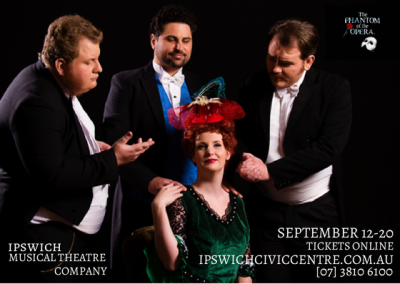 Carlotta, the ‘Prima Donna’ is a juicy part which Elise Pickersgill played to the hilt. Looking gorgeous in her Hannibal dress, she held the reign on ‘camp’ and was deliciously comic and bitchy. As her tenor co-star Piangi, Francesco Nucifora did a fine job of deliberately singing badly bringing fun to the part. Luke O’Hagan and David Harrison were a delightful pair of opera managers, Olivia Bird was a pretty but vocally light Meg Geary, while Susan Glosko as the Phantom’s mouthpiece Madame Giry, bristled with impending doom. Musically one of the best performances was in the opera manager’s office with the “notes” and “Prima Donna” sequence. It was a highlight.

The costumes and sets were opulent with the subterranean boat on the lake awash with dry ice, and the chandelier rising and descending from the flies with spectacular displays of pyrotechnics. Lloyd Webber’s musically adventurous score with its pastiches of grand opera was in good hands with conductor Geoff Secomb’s tight control of the 19-piece orchestra. They were an added plus to this more than accomplished production.