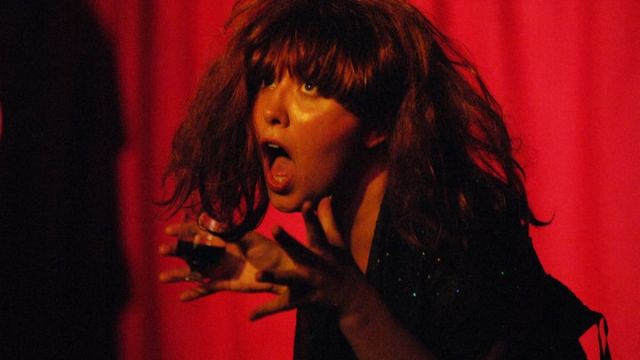 The media release for Phlegm Fatal playing at Open Studio in Northcote for Melbourne Fringe Festival, said great things. Amy Bodossian is entrancing and wild and an artist of the spoken word. “Like a mortician I can make the dead look pleasant, presentable. I am an artist” The media release gave certain expectations that were completely blown out of the water. For one thing, Bodossian barely mentions death; her show is more about life, and love. ‘Phlegm Fatal’ a blend of original poetry and song, doesn’t get off to a swinging start. Her quirky personality and saucy friendliness draws the audience in and prepares them for a night of shocking jokes and naughty anecdotes. However her first poem is about the beauty of the moon. Not bad as far as poems go, but it drops a little bit like a cold cup of tea on the palate after the pizzazz of the opening song Come on to my house in which Bodossian threw lollies to the audience. Ordinarily any deviation from the song-patter-song formula of cabaret is refreshing, however after three poems in a row, it was more than time for a song. This is not to say that the poems weren’t beautiful or enjoyable. Bodassian has a wonderful grasp of language, and a very humorous system of delivery. The poetry is spoken in a very 60’s beatnik style over music, played on guitar, piano and clarinet, by the very talented ‘Paul’. The name of the show is a little deceptive, there are not that many references to bodily fluids except for the occasional, not so discrete nose wipe. While the show got off to a slow start, it picked up pace from the moment Bodossian donned washing up gloves and sung Domestic Bliss. She was physical, ironic and funny. All of a sudden the audience experienced the true potential of her bluesy voice, she swings from a gutsy high belt, floating melodies to a deep earthy croon on those low notes that even some men would not be able to reach. From that point on, Bodossian actually was entrancing. The poem about childhood, would speak straight to that inner child that resides in the soul of any person who grew up in Australia. It left you with tingling toes and warm memories. The original song about her childhood toy Clowney was utterly beautiful and heart wrenching at the same time. The highlight of the whole show. She announced the last poem of the show, of which the closing line was “To leave the stage” and it was the perfect ending to this show, not that the audience were sick of her, but that it was entirely appropriate. However two songs followed and the audience was left with a rendition of Kylie Minogue’s Love Me. A quirky show, filled with love and cheekiness, great for anyone who likes a bit of spoken word.

Venue: Small and cute, on the plus side they serve sangria and crepes. On the very very low side, the ‘stage’ is right next to the entrance, and the band due to perform after Bodassian kept on walking in, unapologetically mid song, and rudely dumping their instruments right in front of the stage. This might be acceptable for a gig at a pub, but not during a one woman cabaret. There should have at least been a sign on the door saying “Wait until applause”
Adele Scott.