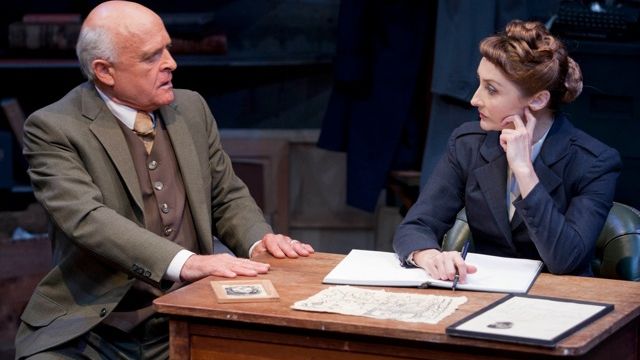 It’s Paris in 1941, the day before Pablo Picasso’s 60th birthday, during the Nazi Occupation.

Pablo Picasso is interrogated by an attractive female German Cultural Ministry agent, and coerced to verify the authenticity of three drawings. The agent needs a Picasso identified for inclusion in an exhibition of ‘degenerate’ art, only the artist can do this, and his freedom is clearly the price. If I reveal much more detail of this 90 minute two-hander I’ll be branded a spoiler. Suffice to say there are twists and turns, cat and mouse power plays and hints of sexual tension, as the purpose of this identification, and the back-stories of both characters are revealed.

Wrapped up in the play there’s an education on Picasso and his art, an examination of critics, and an insight or two into Nazi Germany.

Sharon Millerchip (Miss Fisher) looks the role from her first entry, down to her tightly styled hair. Nuances early on give her performance space to broaden with new revelations. It’s great to see this talented musical theatre star expanding her horizons.

Did the Picasso have a propensity for punch lines rivaling Oscar Wilde? In an interesting, though slightly imperfect play for mine, Picasso’s dialogue features some great one-liners, but can also become just too much of an art history lesson or debate on criticism, and blatantly didactic. While Danny Adcock finds a wily arrogance as the artist, and a carefully crafted eccentricity, he lacks the great artist’s implicit seductiveness.

Stage accents, his Spanish, hers German (the play is spoken in English, though the characters are supposedly speaking French) are modified for clear, effective delivery and consistency.

It’s in the plays brisker and more urgent exchanges that it really comes to life and entertains.