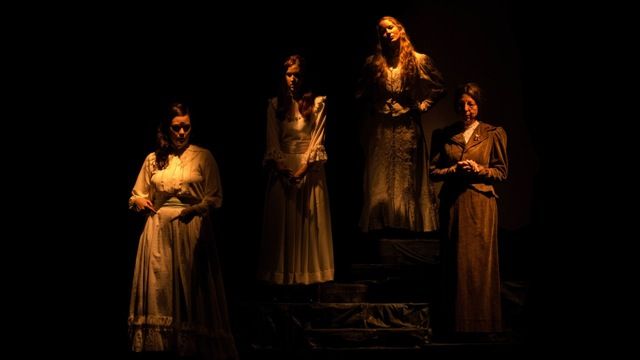 More than a premiere, this is a once-in-a-lifetime theatrical event!

The story obviously burned in Carol Burns’s mind for a long time until she created her own true-to-the book interpretation of the Lindsay novel. Shane Rodwell’s brooding set exudes either mystery or reality according to Alan Lawrence’s ingenious soundscape and Geoff Squire’s illuminations.

Angela Tonuri’s costumes establish the early 1900s and the actors convince us how cumbersome they were, even for girls in a relaxed picnic situation.

Burns’s ensemble engages us from lights-up and tease us all the way to the end, heaping disasters and mysteries on each other. We leave the theatre questioning and puzzling: what really happened? Gold star icon of Brisbane theatre that she is, Ms Burns has created a masterpiece of entertainment for us. Despite the emotional clout the ensemble delivered, a few actors inevitably remain in the memory: Clearly, Brenna Lee-Cooney as Mrs Appleyard carries the weight of the drama with aplomb as waves of the peculiar drama destroy her school’s reputation and her own sanity; Amy Clarke’s gorgeous, svelte Mme Dianne charms us; we can identify with the emotional state of Hannah Schuurs as Sara; and Elodie Boal as the ‘plump girl’ who renegs on the adventure; Andrew Lowes’ charmingly naïve and unaffected turn-of-last century young Aussie, Albert, wins the hearts of young females in the audience.

It is a night of stars. Clearly the director’s attention to detail is evident in every character’s portrayal. That each is committed and lives the part is testimony to Carol Burns’s careful rehearsal procedure.

This is truly a rare experience of theatre par excellence!