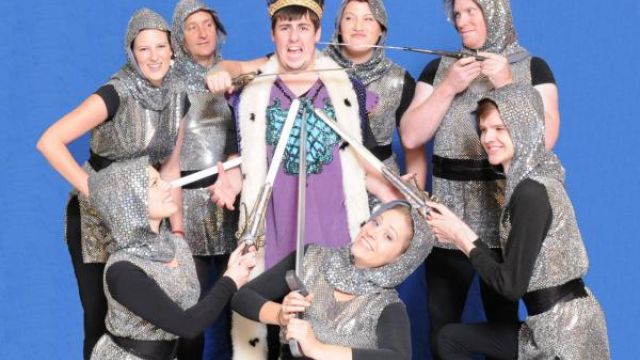 In an explosion of glitter and facepaint MLOC’s Pippinopened last Friday night with panache. An enthusiastic opening night crowd were in for great fun as the cast, led by Drue Goodwin as Pippin and John Davidson as the Leading Player, took them on the journey through Pippin’s life with more dancing, colour, glitter and sequins than would be required for Mardi Gras.

Goodwin and Davidson were well cast as the two leads. Goodwin showed the different faces of the intellectual and emotional Pippin with ease, while Davidson’s suaveness lured the audience into Pippin’s story. Helen Giannakis and Daniel O’Donoughue made an excellent double-act as Fastrada and Lewis. Between Giannakis’s cunning and O’Donoughue’s combination of medieval meathead and Frank N. Furter, these two schemed their way together through the story (with some Rocky Horror Showreferences for good measure).

Danika Alt stole the show as Bertha. Though young, she successfully convinced the audience that she had lived a life and her memories kept her warm at night. Amy Anderson and Chris Burgess as Catherine and Theo were a gentle reminder of the comforts of everyday life.

The band was excellent though sometimes a little loud, and though there were a couple of opening night technical glitches, these were minor and didn’t detract from what was an excellent night out.