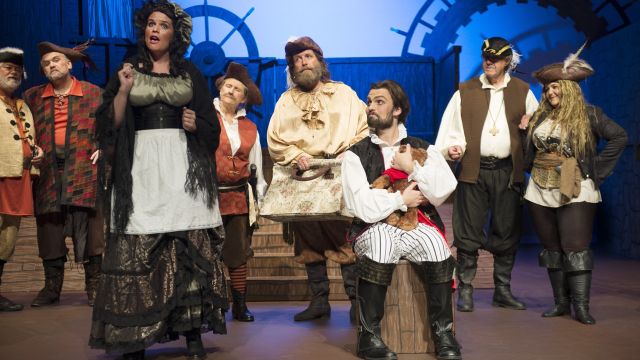 I must confess to being a G & S tragic, seeing most of the operas on many occasions.

I wanted to see this Gilbert and Sullivan Opera Sydney production for a number of reasons.

I had never seen a production by this group, which has been around for many years, not always with the same name. I also wanted to check out the Smith Auditorium, part of the Shore School in North Sydney.

First, the auditorium. Here we have a 500 seat space spread over a well raked stalls and a dress circle, fitted with comfortable seats. A large orchestra pit will accommodate at least 30 players in comfort. Then there is a large well equipped stage, fly tower included. A very functional venue where a lot of different productions can be staged.

Local Government please take note. The private schools in Australia are leading the way in this important area. Now for the opera. I arrived early so I had a good chance to read the program and the biogs contained therein. Director Victoria Watson has an impressive list of achievements in the program, so I have to say I was disappointed in the direction of this Pirates. It was for my liking too safe and predictable. It certainly was not bad, but there were a number of missed opportunities which could have enhanced the comedy of the piece.

Choreography by Sarah Pearce was equally safe, but well executed. I hasten to add the this is not a big dance show, but a vehicle for beautiful music and singing., and that is what we got.

This company is one of a few remaining which does not rely on sound reinforcement, and that is a joy in itself.

Musical Director Rod Mounjed has assembled a large orchestra of some 30 players for this production, and for the most part the singers were not competing with the musicians. Of course that reflects on the cleverness of Sir Arthur Sullivan’s orchestrations, written to assist the singers in delivering the goods. This only works with a sympathetic conductor, and Maestro Mounjed is one of those. The assembled cast is of high quality, starting with Daniel Verschuer as Frederic paired with Sarah Arnold as Mabel. Well matched voices blended beautifully in the duets, which then allowed the solo pieces to shine.

Chris Lewis plays The Pirate King. The program tells us that Mr Lewis is WAAPA trained, and that is obvious. His portrayal is assured and definite, matched by first class vocals. Zoe Arthur plays a very strong Ruth; good consistent diction throughout enhances her dialogue in the story telling and her songs,

The next line-up of principals is equally impressive, Joshua Knight as Samuel, Laura Griffin as Edith, Angelique Tot as Kate and Holly Champion as Isobel.

Then there remain the two pivotal roles of the Major General and the Sergeant of Police, played by Mitch Bryson and Toby Page. Mr Bryson is well versed as the funny man in the G & S repertoire and this is evident in his portrayal of the Major General. Clarity of diction and good projection are all important with G & S and this performer delivers both in spades.

The surprise of the production is in Toby Page as the Sergeant of Police. Here is a young man with an extraordinary bass baritone voice. The program notes advise that Mr Page is still a high school student. I overheard patrons discussing this fine performer, suggesting that he is 14 years of age. 14, 16 or 18, it doesn’t matter, this is a young man who could go places. His portrayal of the role reflects a far more experienced performer. Watch this space.

Gilbert and Sullivan works rely on good chorus work, and that is what we got from this small but well trained group. The unaccompanied “Hail Poetry” in Act One was particularly impressive. This Pirates is beautifully dressed by Sandi Tutt and her team, although one could question young Victorian ladies appearing in public in their underwear, particularly in a chapel, ruined or otherwise.

A permanent set designed by Bradley Hawkins provides a number of levels to perform on, and allows many creative pictures to be formed.

The production will be staged again over next weekend and is certainly worth the trip to North Sydney to see this ageless classic.