The Pitch & The China Incident 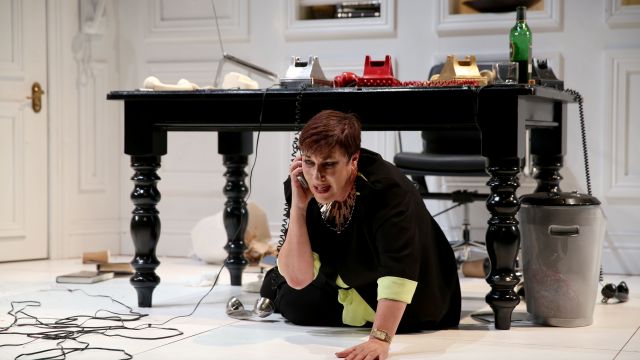 Barbara Lowing’s solo performance in The China Incident is comic gold. Her manic day in the life of PR guru Bea Pontivac is one riot of laughs from start to finish. Whether putting a positive spin on an African dictator’s massacre, fielding inappropriate calls from the President of the United States, or setting up a sexual tryst with a U.N. friend in New York, she is bliss with a capital “B.” Throw into the mix a daughter whose wedding clashes with all her plans, and a son who’s just been arrested for drug possession, we have a classic farce scenario which director Daniel Evans built to a satisfying conclusion. Unfortunately I can’t be as positive about the eminently tedious The Pitch, where a would-be screenwriter pitches a Tropic Thunder concept to three Hollywood moguls. It’s hard to send up Hollywood when they do it so well themselves, and for the record, there are more laughs in six minutes of Tropic Thunder than 60 minutes of this play. Hugh Parker is required to impersonate a dozen Hollywood names (i.e. Clint Eastwood, Robert DeNiro, Rupert Everett etc.) which he does badly, and sprout lots of knowingly bad dialogue which fails to raise anything like a chuckle. The piece feels dated, especially with so many Clint Eastwood punch-lines. Simone Romaniuk’s set design worked well, but where did she find those telephones for The China Incident? They looked like they’d been rescued from a 1960s Doris Day movie.

One-man plays are notoriously hard to do. On this occasion Barbara Lowing got it right, but Hugh Parker unfortunately let the side down.