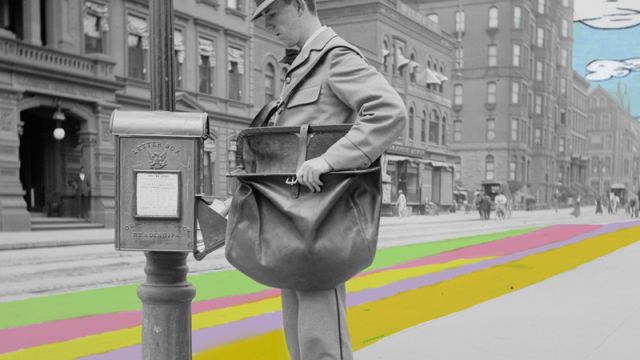 Lama Theatre Company was founded by Hila Ben Gera, who is also the author of The Places You’ll Go. Having premiered the play in New York City in 2014, she has assembled an all-Australian cast to breathe life into this version for the Adelaide Fringe.

The Places You’ll Go is a thought-provoking play that poses questions about what constitutes success and happiness. Ben Gera’s play is a social commentary about how we associate success with wealth, status and materialistic things. She endeavours to look further into this topic by introducing us to five characters.

Grace Lowry and Alex Roe respectively play a work-weary woman and man. The actors do a fine job in portraying a neurotic couple. After becoming parents they realise they have no assets to leave their child. The performance reflects on the importance of leaving one’s children with life lessons as opposed to bricks and mortar.

Postman 1 and 2 are played by Tom Halls and Sean Rees. Both are caught up in the routine of daily life, but are desperate to break free and be “successful”. After struggling to meet society’s norms one of them finds the true meaning of life in simply being kind. Hila Ben Gera herself portrays a bustling businesswoman under the strain of a busy lifestyle.

Direction by Cassandra Fumi is full of pace and creativity. Acting is strong, with all actors clearly understanding the text.

The production is tight and well thought through, with lovely comic touches.