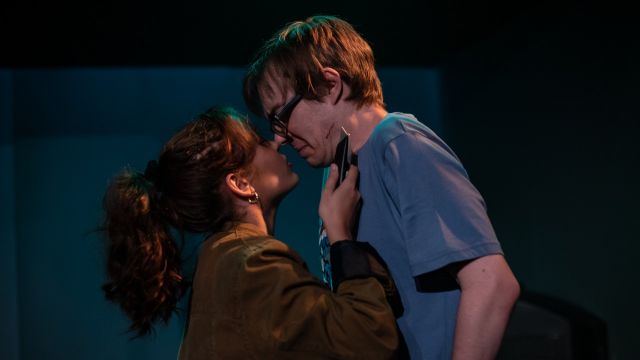 A strongly written new work, crafted by Scott McArdle, this edgy and moving coming of age story follows a pair of teenagers as they help each other deal with trauma.

Late one afternoon, young teens wander through the bush in an outer suburb. Lucy says, with some excitement, that there is a dying kangaroo bleeding badly from its guts. Arnold follows.

While it sounds rather disturbing, and deals with a slew of confronting issues, this beautifully told story is one of the best new works of the year, and a wonder to watch.

Two 13 year olds, Lucy and Arnold, form an unlikely alliance. She is defiant and outspoken and drawn to the macabre. He is awkward and uncertain. It soon becomes clear that they are drawn to each other for very disturbing reasons, and while both need help, they are each others’ answer. Excellent performances from Courtney Henri and Daniel Buckle, who capture the adolescence of the characters beautifully and create a tangible friendship. Strong support from Siobhan Dow-Hall, as caring English teacher Miss Richards, fighting her own demons and doing her best, and St John Cowcher as Lucy’s step dad Rhys, a rough diamond also struggling to do better.

Sara Chrichilli makes the most of the limited space to create relatable spaces that lay on top of each other to strong effect, with effective video design by George Ashforth and highly emotive sound design and composition by Rebecca Riggs-Bennet.

Play Things is really heartfelt, effective story telling that draws you in and demands that you care about these beautiful, disturbed and odd young people. Well worth seeing.