Point and Shoot – A New Musical 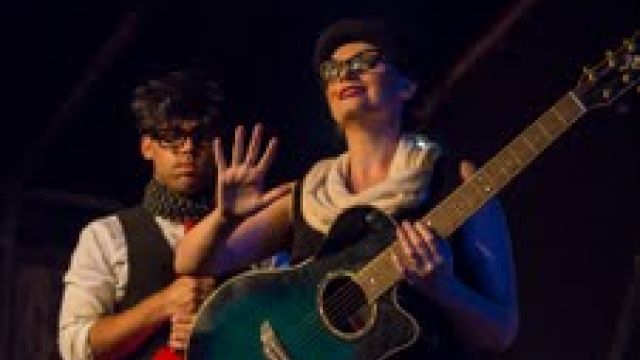 Four multi-tasking, multi-talented actors play fifty-four characters and a dozen musical instruments, sing one clever, witty song after another, and (good grief!) tell a comedic, satirical story about the film industry!  This highly entertaining show has won awards and already been reviewed for Stage Whispers by Kimberly Shaw in another city.  Kimberly said the show is ‘hilariously funny and extremely clever’.  Correct.

‘Musicals’ are tough and many more fall by the wayside than you even get to hear about.  This one has the goods in its very own way.  Tyler Jacob Jones and Robert Wood are clearly steeped in musical theatre lore and fool around with it with enormous confidence.  Yes, the music is pretty much pastiche, but these guys know it is.  You won’t leave humming any unforgettable tunes, but you’ll leave still laughing at songs like ‘Absolute Perfection’,  ‘Everything’s Gotta Go’ and ‘Point and Shoot’ – and you’ll remember the talent and skill with which they are delivered.

It’s 2042 and the spate of tent-poles, sequels, prequels and CGI action adventures has bankrupted the big Hollywood studios.  (A derelict old man called Michael Bay makes a brief appearance – hasn’t worked for thirty years… )  All that’s left are a bunch of snobbish ‘indies’ who make ‘Art’.  But one lonely, exploited screenwriter (not everything has changed) dreams of writing a movie like those of his childhood – Iron Man, Transformers, The Avengers, et al.  Then a dizzy redhead walks in with her inheritance, the rights to a 1960s sitcom called Selma Saves the Day.   We see a clip.  Yes, of course, it’s beyond terrible, but the screenwriter grabs the idea – and the redhead – and takes both across town to a schlockmeister producer who also yearns for the good old days…

Okay, it’s cheesy – deliberately so – and maybe it’s a little clunky and the satire isn’t razor sharp, but the cast delivers with an energy that leaves the audience breathless, the story rockets on at a dizzying pace, peppered with sharp observation, a gallery of classic movie and musical types and then there are those songs.  All the cast at various times play keyboards, a double bass, flutes, a sax, a clarinet and a drum.  If I have a small reservation it’s with these multiple instrument moments that disengage and break flow; they’re ‘funny’ in themselves, more about underlining the cast’s amazing abilities than about the show itself.

Tyler Jacob Jones’ major role is the screenwriter and he gives us this and a dozen other roles with unflagging energy and grace - almost as well as he writes the book and the song lyrics.  Robert Woods, the composer, supplies the melody line of most songs on keyboard, but he also plays two different producers, a street beggar and seer, and a fan of the old sit-com.  Tamara Woolrych is the eponymous Selma in the sitcom clip and in the blockbuster movie (yes, it gets made), and she plays the redhead and the redhead’s twin sister – one sweet, shy and naïve, her twin a brassy sex bomb.  When Ms Woolrych sings ‘Absolute Perfection’, she alternates between the twins, mining double entendre for all it’s worth and distinguishing visually only by switching a rose from her hair to her neckline and back again.  Then there is Erin Hutchinson, a natural comedienne if ever I saw one, with the most mobile face, capable of wonderfully funny but very convincing transformations.  Ms Hutchinson impersonates a snotty indie producer, then the schlockmeister’s adoring and exploited girlfriend ‘(Everything’s Gotta Go’ – including her), a doofus uberfan, possibly others (it goes so fast) and, most memorably, an imperious, very rich bitch serial widow, Donna, the movie’s principal investor.  As the last, taking over the movie and calling the shots (literally), her big number, ‘Point and Shoot’ is – together with ‘Absolute Perfection’ – a high point of the show.

I saw this show on opening night.  There were eight people in the audience.  The cast, nevertheless, did their show at full throttle as if to a full house.  They’re professionals.  They deserve better.  Come on, Melbourne music theatre types – this is ridiculous.  Get over to Revolt in Kensington, welcome these out-of-towners and enjoy a great show.