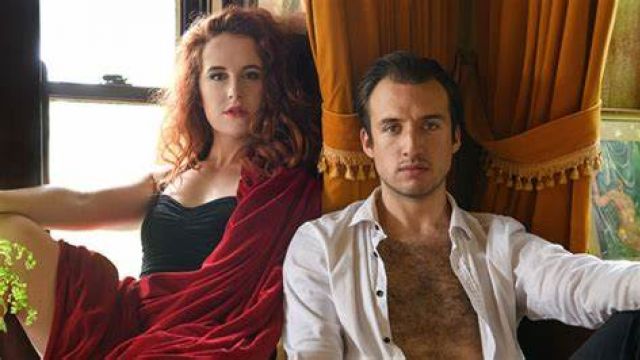 Patrick Durnan Silva and Honour Wolff are clearly a talented duo; they bounce off each other with energy, skill, and great timing.  He is big and solid – a great contrast to the occasional delicacy of his work – and his ability to use silence and immobility.  She is cute as a button, bursting with vitality, and has a smile that adds acid to the jokes.  The childish title of the show suggests ‘naughty’ and ‘rude’ straight off – and, sure enough, there are plenty of ‘filthy’ and explicit numbers.

At the start (well, eleven minutes in), they claim that they’re sick of comedy and that this will be a ‘serious’ show.  In fact, much of their show is ‘serious’ even while it’s a varied, fast-moving sketch comedy show held together (if it is) by a strong strand of cynical, satirical anger.  They whack at targets like advertising, sexual stereotypes, and taboos.  Helen Reddy’s I Am Woman, Hear Me Roar is interrupted by an advertisement for female shavers – and Ms Wolff shaves all - until she bleeds.  The two of them dance a bit, they sing a bit (a pointed ‘Nowadays’ from Chicago), and a song of their own, ‘We Want to Get Fingered’.  (The composer is Kellie-Anne Kimber.)  They are 12-year-old 1960s schoolgirls; later, they are lads at a 1960s boarding school.  And it’s about sex.

Pursuing a wider audience than gays and women, Ms Wolff takes off her top and fakes an orgasm…  But the most powerful, on-the-money numbers are to do with the hard, false promises life of performers.  Mr Silva’s sketch, for instance, about how he developed confidence by studying ‘acting’ is painful - and superbly done.

Silva and Wolff have won awards for their writing and their performances, but on this outing, Poopie Tum Tums is a bit arbitrary, a bit hit and miss, a bit thin and a bit too often trying too hard to be funny – that is, the effort shows - rather than funny.  Perhaps it would be more successful live rather than as a cold-eyed recording.  (By the way, no one is credited with the camera work, editing and lighting, but all are excellent.)  It probably doesn’t help either to shoot in a theatre – i.e., so it’s a recording of a theatre show – with an ‘audience’ of five people.  Self-referential self-deprecation can go too far.

Here is an example of a familiar phenomenon in the Fringe, Comedy and Cabaret Festival space: conspicuously talented, appealing and even award-winning performers who have created their own material - apparently out of necessity, so that they can work, put on a show, get seen and be truly professional.  Indeed, one of their very best sketches here makes a bitter joke of their having done three years of drama school, of their having studied clowning at Le Coq in Paris, and improv in New York.  And where has it got them?  Here.  Putting on a show in a near empty theatre, dressed in T-shirts and shorts.  When their material and performances come together, we can see how these two can shine, but they could do better.  Both, certainly, need and deserve better material.  I hope they get it.