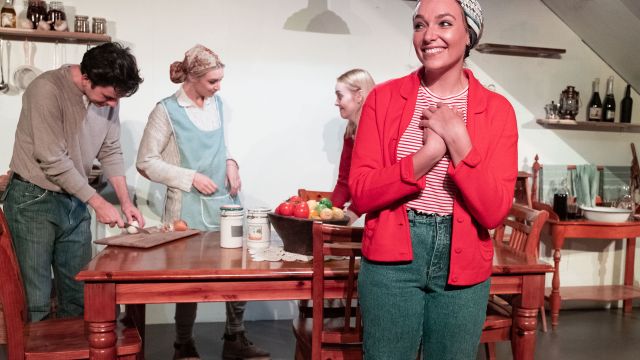 Who doesn’t love Italy?  David Dale once asserted that Italy had colonised Australia by stealth.  Coffee being our national drink, and pizza our national food.  So who could resist The Poor Kitchen by Daniela Giorgi?

The Poor Kitchen is a new Australian play set in Italy.  The play had its first outing at a season for new works in 2016, and many people were keen for it to be given a full season.

From the humorous image on the poster, and description “a funny and deeply moving play that explores the personal, the political and the pasta!”, I had assumed The Poor Kitchen would be a light-hearted comedy, with some feel-good moments.  I also thought there’d be more of a focus on food.

The Poor Kitchen IS funny, but also has something to say about family tensions, community, immigration, agriculture, and the cultural clash between rural Italy and urban Australia.

I thought that this would mean Downstairs was easily accessible.  However, you enter the building via stairs to the side of the old entrance. Audiences for the two shows are in the lounge bar together, which makes for a nice buzzy atmosphere.  The start times of the shows are staggered, to avoid crowding near the two sets of stairs.  Snacks are available at the bar, including some rather decadent (read delicious!) ice creams.

The space is long, with three tiers of seats facing the stage.  I was sitting at the extreme end of the front row (near the fire door).  The play was expertly staged, so I had no trouble with the viewing angle.  Being near the fire door did mean I could hear noises from the street, but the sound design compensated so that rural cows were more immediate than sirens or traffic lights.  The play itself kept your attention. 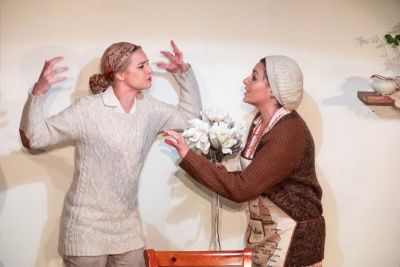 The action does move into the audience, but only very briefly.  I found the sightlines were a problem then, but my friend very sensibly just listened to the dialogue.

There is one very loud scene.  So if you’re sensitive to noise, head for the back row.

The set is wonderful.  Very much the Italian farmhouse.  The costumes are also entirely right for a farm in Italian winter.  The lighting complements the set, and the play.

The Poor Kitchen is well-crafted, and relatively short for a full-length play.  It uses the clever device of actors speaking normally when they are supposed to be speaking Italian to each other, and using an Italian accent when speaking English to the main character.

It is a difficult thing to speak with an Italian accent, use gestures, and capture the “bigness” of the Italian spirit, without stepping into caricature.  Taylor Buoro, as Anna, does a brilliant job of making her character warm and filled with energy, without becoming a stereotype.  Myles Waddell’s portrayal of the more serious Carlo also captures the Italian essence.

Half the cast play a second character.  This doubling-up is very effective in the context of the play.  David Jeffrey made an impression as Aldo, as did Amy Victoria Brooks as Sofia.

The first half of the play is more humorous.  The audience greatly enjoyed the misunderstandings, cultural clashes and bits of business.  The second half deals with darker themes.  This allows the characters to go on a journey, which is generally the sign of a good play.

I felt that some of the scenes could have had more of a build-up.  I also felt that the two characters that go on the greatest journey could have been more nuanced at the start.

However, the opening night audience were wildly enthusiastic.  And it wasn’t just friends and family.  There were quite a few critics in the audience.  Both myself and my friend enjoyed the show, and had quite a lot to discuss afterwards.  Another sign of a good play.