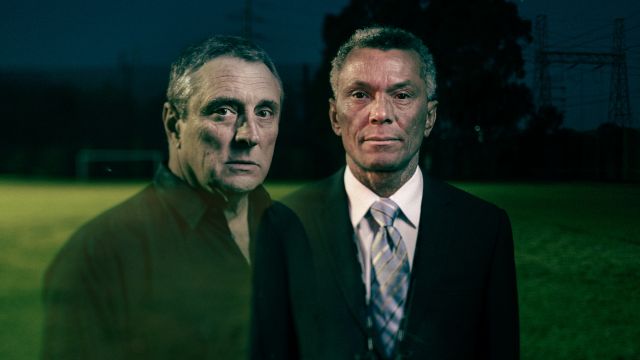 This is Red Stitch’s first show back after lockdown.  Before we went in, Artistic Director Ella Caldwell welcomed us, and the Red Stitch audience of regulars and just theatre lovers cheered the event.  Nevertheless, Prayer Machine is, perhaps, a curious choice by Red Stitch to kick off their (our) return to live theatre.

A man waits in an anonymous hotel room.  He is Peterson (Patrick Williams): trim, neat, hard-edged, in a suit and tie.  He will prove to be an expert in emotional evasion.  He is joined by Cantona (Joe Petruzzi): looser but anxious, a little rumpled and needy.  We will learn that they have a past that stretches all the way back to high school when something began that has never ended.  Their intermittent relationship, which neither one of them would describe as ‘gay’, is based on immutable desire.  But Peterson refuses to acknowledge love (he is married, with children), even if he keeps coming back.  What Cantona wants, above all, is that very acknowledgement.  He yearns for Peterson to ‘recognise’ him, to see him.

This is a play about power just as much as it is a play about emotion denied.  A play where power is exercised to maintain control and distance.  One of Peterson’s evasions is to remind Cantona that he is superior and successful and a would-be mentor.  A rare moment of wince-making humour is when Cantona interprets something Peterson has said as an emotional statement about them, only to have Peterson correct him, ‘No, I told you to learn about real estate.’

Director Krystalla Pearce uses fleeting images punctuated by blackouts to establish the nature of their sexual relations: an embrace without eye contact, Cantona pressed against a wall, Peterson undoing his belt.  This isn’t ‘coy’; it is all that is necessary.  It is no surprise to learn that Peterson is the ‘top’.  But only once does any explicit description of sex explode into their dialogue and it is, of course, a matter of each man having his own version of it.  We know – and it’s painful to see and feel – that Cantona is truthful, and Peterson is lying.

Krystalla Pearce’s mise en scène is all about the spatial distances between the two men, and the thwarted eye contact between them.  In each case, we feel Cantona longing to close the distance, or to make eye contact, but he knows to hold off, fearing rebuff, and in any case, Peterson is almost always deliberately turned away, or checking his phone.

Bethany J Fellows’ austere design never varies, despite the characters’ meetings occurring in different places, until the end when her set ingeniously becomes a dim lit freeway underpass, the place it all began, and the place where for a few moments it seems that an uninhibited happiness might be regained.

If there is a flaw to Prayer Machine, it is that it is a little thin on story and development.  I can think of two other quite recent plays about fraught gay relationships (Become the One and That Perfect Moment) that are slightly better by simply having more story and more consequence.  Here, aided by precise casting, nuanced performances, and Fellows’ wardrobe, we get the measure of these two men rather early on, and as the play proceeds, we get not a whole lot more than variations on the theme of need blocked and denied.  The play can feel as if it is marking time, tension almost ebbs away, and we might even get just a little antsy that Cantona can’t see what is plain to us – until the genuinely poignant ending.

But Pearce’s casting choices here are just right: we have a grasp of character before a word is spoken.  Patrick Williams’ achievement is in never wavering from his off-putting persona – and making that entirely plausible.  Joe Petruzzi’s Cantona is chunky, soft, and achingly vulnerable.  It is a superb performance from Petruzzi, adding even more to his extensive range.  His Cantona is a sad loser, not even too bright except for his emotional insight, a sweet, loving man crippled by his mistaken love for Peterson.  The tragedy of the play is not that Peterson is unable to love; it is that he is all too capable, and he refuses.  Without Cantona, he is an empty man, as he was an empty boy – and he has too much to lose.

Prayer Machine is searingly honest and insightful, Williams and Petruzzi give low key but exact performances, Pearce gets all she can out of the text, and we are convinced of its truth, but it is an experience that leaves us sad and thoughtful rather than uplifted.

BUY THE SCRIPT AT THE BOOK NOOK PERFORMING ARTS BOOKSHOP.