A Prelude in Tea 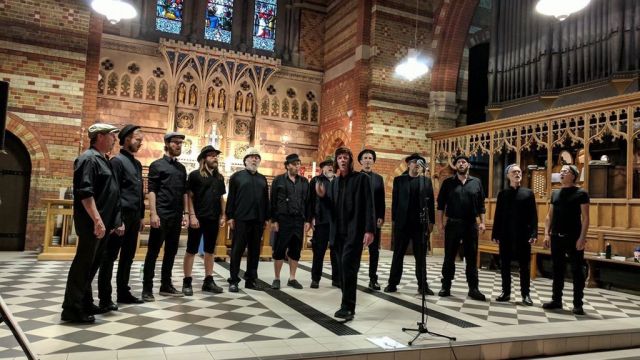 What is A Prelude in Tea? It’s a series of Sunday afternoon concerts featuring afternoon tea and a music performed by some of Australia’s best and most exciting small ensembles, presented in the stately Independent theatre with its impressive acoustics. I was lucky enough to be invited to attend many of the 2018 concerts, but not once last year did I see the patrons crowding the foyer or spilling out onto the footpath and into the side lane as they did yesterday.

What could possibly attract such an enormous, animated crowd? Obviously, I’d not experienced the “rumbling, steam powered and black clad behemoth” that is The Spooky Men’s Chorale. Nor the eclectic theatricality of their performances.

Led by spookmeister Stephen Taberner – conductor, songwriter, arranger and deadpan comedian – the Chorale is ‘Not a Men’s Group’ – as we were told emphatically and very harmoniously in one of their songs.

Rather, think of them as a “wall of mansound … who seek to commentate on the absurdity and grandeur of the modern male, armed only with their voices, a sly collection of hats and facial hair and a twinkle in the eye”.  That is, sixteen men who synchronise beautifully while being cheekily satirical and extremely funny.

Formed in 2001 by Taberner, The Spookies emerged from the Blue Mountains, singing Georgian table songs, ballads and their highly original “man anthems” such as “Jim”, a musical dig (pun intended!) at the ubiquitous expansion of once small gardening/cleaning/pet grooming companies. They have gone on to tour locally and internationally – and as the crowded theatre yesterday attested, they have attracted a more than enthusiastic following.

Taberner, a master of the use of pause, intersperses the songs with a poker-faced commentary that is complemented by similarly straight-faced reactions of the singers behind him.  This is an incredibly well-disciplined group who mix music and satire in a performance that is melodiously entertaining as well as being mischievously sassy.

The concert gave us songs from their original repertoire, many written by Taberner.  In the suggestively titled, “Don’t Stand Between a Man and his Tool”, the guys skilfully mimed using a range of tools while they sang lyrics such as:

Some of them use batteries

Some of them use mains

Some of them are quiet

They also paid tribute to other musical styles, including a tribute to their original Georgian repertoire. Tall, silver-bearded Dave Warren led them in Tom Wait’s lyrical love song “Picture in a Frame” and their combined composition based on Tennyson’s metaphorical elegiac poem “Crossing the Bar” was emotionally moving. They forsook their individual hats to don orangey coloured cones for “the prophecy of the Three Brothers” and had all but a reluctant few standing and dancing to their very loudly demanded encore.

They Spooky Men are more than a chorale. They are a tightly-knit musical ensemble who understand that men singing in harmony can be political, sardonic, theatrical and much more than just “a men’s group”.

OR book for their performance at The Seymour Centre on June 1st.