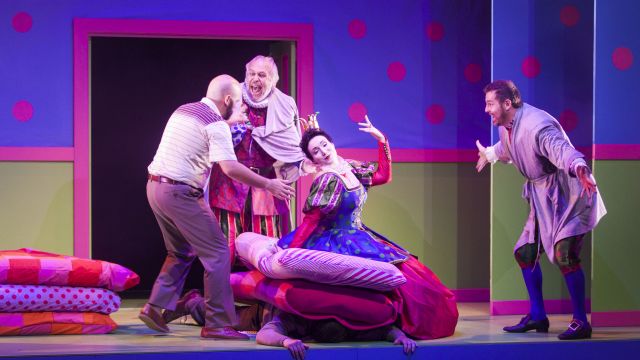 In choosing this particular retelling of the famous fairytale, and aiming it squarely at families, Victorian Opera seemed to have succeeded audience-wise – excited children of all ages abounded through the foyer in the Arts Centre, and filled the Playhouse for the 40-minute one-act opera.

The production itself, designed by Candice MacAllister, is set in a television studio, with a looney-tunes-esque screen to set the tone, and is a riot of carefully-designed colour, bright lighting and simple, effective props, allowing the on- and off-camera shenanigans to fill the space. In sharp contrast to the rich, patterned costumes of the “actors” the “production staff” were clad in everyday clothes, even if occasionally co-opted into the cast using the power of dress-ups, to underscore the moral of the story: don’t judge a book by its cover.

VO has wisely chosen an exceptional ensemble cast to manage the demands of Ernst Toch’s score.  As the hapless production assistant thrown into the titular role of the Princess, Olivia Cranwell’s bright and burnished soprano was delightful, and she delivered her transformation to triumphant royal fiancée with excellent comedic timing.  Kathryn Radcliffe sang the glacial and unapologetic snob of a Queen (the closest the production came to touching on the tale’s original undertones of racial purity) with haughty precision, and as her husband the affable King, bass Jerzy Kozlowksi provided solid support and not a few laughs himself.  As the narcissistic Prince, James Eggleston was beautifully torn between his love of posing and gazing into mirrors, and chasing after his Princess.

Dimity Shepherd both narrated the story and then jumped right inside it with cape-twirling abandon and a gleeful, if somewhat over-cooked performance as the TV Host. Finally, as the director and his cameraman, Michael Petrucelli and Michael Lampard both delivered vocally assured, polished and comedically-rich performances, grounding the production and their cast-mates.  Special mention must be made of Mr Petrucelli’s splendid turn of pratfalls, and of Mr Lampard’s ability to switch between multiple roles with ease. The ensemble work was excellent, not a wasted moment, even down to the non-singing roles of the production assistants who veered between boredom and horror. However, even with all of this talent on-stage and off (Fabian Russell conducting a small but effective ensemble that navigated Toch’s serialist music and reveled in digging out every small nuance), and the explosive energy of the excellent cast, Victorian Opera made the singularly ill-judged misstep of having the characters sing in the original German. Despite the careful setup of each scene in English, the moment the characters started singing, they lost their connection to their audience, and the kids let them know in waves of bored noise. This must in turn have been intensely frustrating for the cast, whose excellent work was handicapped by this rather insurmountable obstacle.

Toch’s music is charming and sophisticated (and indeed, The Princess and the Pea was not originally written for children), and it is certainly not melodically or harmonically appealing enough to carry the day and overcome the regular – and inexplicable – shift into a foreign language.  Audiences of that age (and their parents) need to be shown a way into the operatic art form, one that includes and welcomes them, and has them eagerly looking forward to their next operatic experience, rather than enticing them with colour and movement and a familiar story, then bewildering them by singing, effectively, nonsense at them.

If Victorian Opera’s plan is to build a younger audience, then they need to find a vehicle which can utilise all of the impressive talent at their disposal, and connect with the children who attend by, literally, speaking their language.