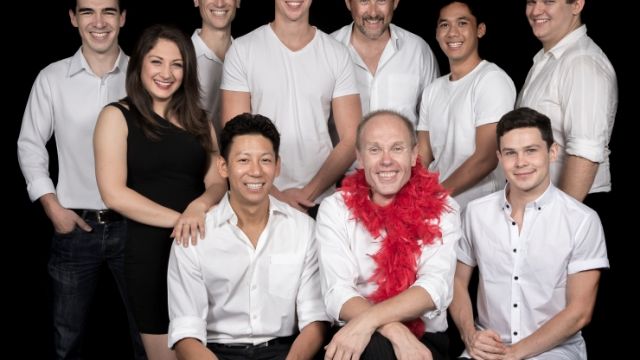 The happy buzz and crush of opening night in the foyer of the New Theatre is made even brighter as The Boogie Woogie Bugle Boys (Henry Moss, David Ouch and Gerwin Widjaja) in stunning satin and immaculate wigs swing into action, setting the scene for a very well directed, fast-paced production.

Set in a British army base in Singapore in 1947, Privates on Parade “deals with very serious questions about gay history and sexual and racial politics … about a time when life was much harder for homosexual men” (Alice  Livingstone, Director).

As such, it is a perfect choice for the New’s contribution to Mardi Gras. It is in turn funny, perceptive and thought provoking. All of the characters – the Brit soldiers, both straight and gay, and the many Chinese and Malays that are depicted – are clearly and sensitively drawn. And, though masked by humour, song and dance, their many messages are poignantly strong.

Through their little ‘Song and Dance’ company, they paint a despairing picture of the post-war world: rationing back home, returned servicemen unable to find work, occupation forces in resentful colonial communities, corruption and black marketeering, racism and sexual vilification, both male and female.

Yet the overall mood is light! Darker moments – the mistreatment of Sylvia, the ‘camp follower’, the Sergeant Major’s constant harassment of the gay men and the local Chinese and Malays, battle casualties – are quickly followed by song and dance routines by the company, or poignant solos by Acting Captain ‘Terri’ Dennis.

Alice Livingstone has made this production special. Her cast is energetic and enthusiastic, skilled in character portrayal and experienced in musical theatre – and Livingstone’s clever direction gives them ample opportunity to display their multi talents. Characters and scenes have been carefully analysed resulting in very real relationships and reactions. This is especially evident in a ‘shower’ scene where the nudity is natural and in no way gratuitous; and the climax of a battle scene that, though short, is incredibly moving. The choreography (Trent Kidd)  is clever and always beautifully executed. The ‘ballet’ scene skillfully combines movement, drama and a touch of humour.

James Lee carries much of the production as ‘Terri’ Dennis. He is a consummate performer who wows the audience with his singing and dancing, yet shows the depth of ‘Terri’s’ perception and the real concern he feels for others based on his own hurt and experiences. As Sylvia, Diana Perini ticks all the boxes! She can sing and dance and act – but as well she brings to vivid life the despair of every displaced local woman caught up by the attraction of foreign soldiers and the escape they might provide..

David Hooley plays Private Steven Flowers very straight and very fair. He’s ambitious, altruistic, tying the plot together with his letters home – and almost unbelievably naïve about sex and love – and Hooley gets it all right.

The ‘boys’ – Morgan Junor-Lockwood, Henry Moss, Martin Searles and Jamie Collette Lance – find all the nuances of each of their characters. Their hopes and fears, their weaknesses and especially the strengths they have found in each other in this particular company. They are all, equally, appealing and engaging – and very talented performers.

Matt Butcher plays Drummond, ‘the bad apple in the barrel’. He sneeringly derides the homosexuals, treats Sylvia and the locals appallingly, is suspicious of Flowers because he’s come from an intelligence unit and may be trying to catch him out on all his black market activities. This is real ‘hiss-the-villain’ stuff and Drummond does it remarkably well.

Peter Eyers plays the very straight and very pucker Major Giles Flack. Eyles has a strong stage presence and uses it and the space well to present the token ‘typical’ officer that Nichols and King have created.

The set, designed by Allan Walpole, works perfectly. The ‘performance’ scenes occur on the stage apron under a brightly lit proscenium and in front of a heavy calico curtain. Behind this is the barracks. Steps either side of the stage lead to a rostrum and some shower cubicles. It is all militarily dark, with doors and some walls made of camouflage-painted corrugated material. Tony Youlden’s lighting emphasises the play between light and dark that is the crux of this musical.

On the side lines, but not quite hidden from the audience, musical director John Short on piano leads Gina Schien (drums) and Laura Mackinnon and Slias Sarez (cello, bass). They are at once unobtrusive but a very vibrant part of the production.

Congratulations to the New Theatre and Alice Livingstone for mounting this production. There is much contemporary relevance in this very poignant play. Superficially things may appear to have changed; it may seem to be easier today to be who you are – but read the paper, listen to the news, think about some of the effects of cyber bullying …