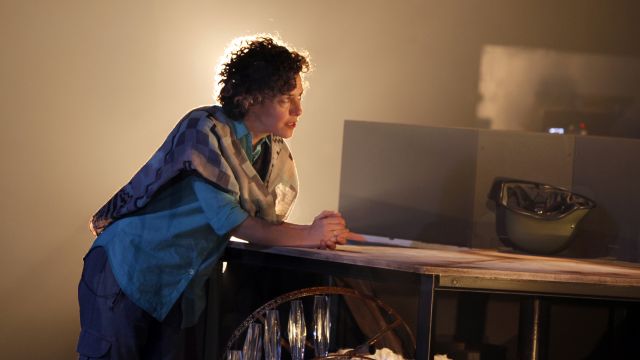 Hydra Poesis, founded by Sam Fox, collaboratively develops interdisciplinary performances to critique social injustice and inequalities. In this production they raise questions about how processes of reporting and social media impact on our understanding of the events of the world and individuals’ responsibility for their responses. Unforeseen consequences add drama and some pathos.

They wove a number of elements around a familiar story of journalists reporting and becoming involved in a developing disaster and people watching the story and interacting with the situation through the internet. They introduced a Greek Chorus of people from around the world engaging through the internet, dance, a ferocious amount of sound and video equipment, quantities of smoke and a strange white floor to ceiling blow up torso occasionally used as a projection screen.

Most of the action took place around a central revolving two level podium. Three large screens were mounted above the central area. There were two other centres set up with chairs, lights and cameras and one area with a teleprompter. Theatrical conventions about split focus and unified action were put to one side with doubling and tripling of focus and continual playing of the three large television screens. 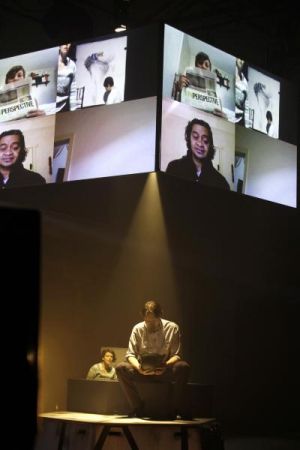 At times focus was directed to screens and the international collaborators who added to the action, commented on it and took small side roads to other aspects of the matters being considered. “Cry Me a River” performed by Dickie Beau, a London based performer, was a beautiful lyric commentary.

The artistic and digital elements were well managed by Matthew Gingold with only a couple of glitches which were quickly sorted out. The leads and media paraphernalia created a physical challenge which was managed with an eye on trip hazards. The dance elements were well executed by Deborah Robertson and provided an alternative opportunity for emotional reflection.

The sound design by Dave Miller was competently unobtrusive with occasional intense bursts motivated by the action. The lighting design by Ben Shaw effectively supported the performers and directed audience attention.

A Skype conversation towards the end of the show was the most effective combination of the dramatic skills of theatre, technology and an edgy critique about the reality of connection mediated through technology. There were moments of frustration when the dialogue couldn’t be heard when it was meant to be and when there was so much going on that the temptation to think about something else for relief was overwhelming.

The question to be answered about any element in performance is “Does it contribute to the purpose of the performance?” In this instance reflections on the role of media in relationships and disasters are overlaid and over-represented with media presentations of the story and performers. Dance and other artistic expressions were also loaded into the mix. This overloading of meaning in the performance mirrored the simultaneous immediacy and distance, truth and lie of the media leading the audience into a direct experience of the issues being explored. Brecht would have been proud of the emotional distancing and invitation to thoughtful engagement delivered to the audience.