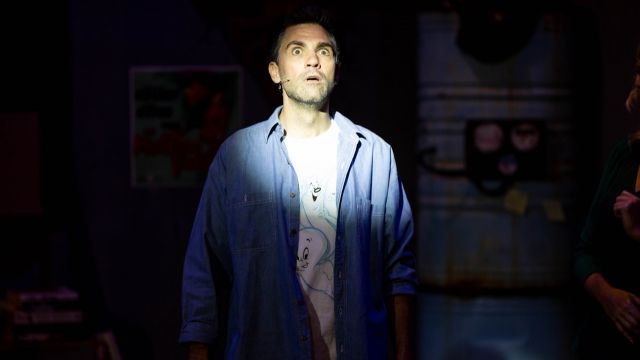 Making up for lost time, The Psychic is Spotlight’s second production since reopening at the end of July.

Billed as “a Murder Mystery ... of sorts” the play is set in the depressing two room basement flat in New York City of Adam Webster, a mystery writer whose life revolves around the characters he creates.

For his latest adventure, the writer has decided to lure his characters into the plot via a hand-written sign advertising psychic readings in his window and from there the plot thickens (or unravels, as the case may be).

Helen Maden has assembled a talented cast of Shannon Wright as the writer Adam Webster with Michelle MacWhirter (the wife), Sean Curran (the underworld figure), Rob Kenna (the detective), Ryan Verbruggen (the two timing husband) and Cat Deller (the husband stealer) as his diverse characters.

The play is a little slow to start as the various characters are introduced to the plot but once the audience knows “who’s who”, the fun and games begin. A comedy is reliant on timing and this show with the well-defined characters is the better for it.

The director’s eye for detail in dressing the set finds the flat adorned with ‘male’ items in a less than house proud fashion.

Spotlight Theatre was the first company in Queensland to reopen and is a great escape from our current restrictions. The Psychic is selling fast so do yourself a favour and book now.