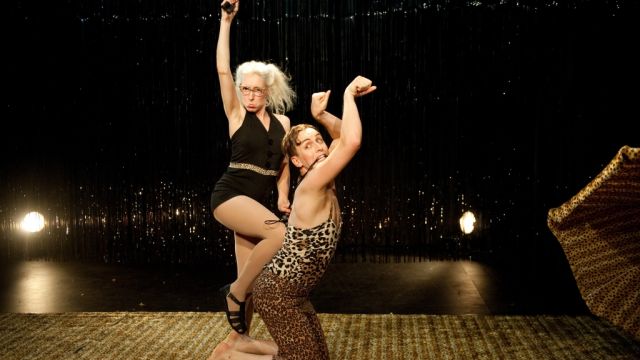 Psycho Beach Party is campy fun with a hip young cast channelling all sorts of B-grade movie characters, and doing it with unfailing energy.

Melbourne actor and writer Ash Flanders, who co-founded the highly regarded production company Sisters Grimm, is both sweet and wickedly funny in the key role of Chicklet. In this gender-bending role, Flanders plays a bouncy teen girl who wants to surf the big waves just like her surfer boy idol Kanaka (Peter Paltos). But she's held back by her youth and innocence, her scary mum (a vampish Amanda McGregor) and to some extent her philosophical friend Berdine, played with a delicious 60s B-grade weirdness by Genevieve Giuffre. Flanders of course looks nothing like a teenage girl but he brings a beguiling cuteness to the character, which works nicely in contrast with the buff beach boys and hot babes he's surrounded by. 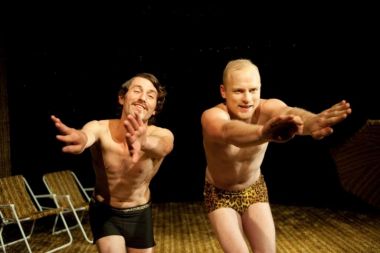 The combination of tight, focussed direction by Stephen Nicolazzo and a talented cast, many of them recent graduates from NIDA and the VCA, means this party continues to delight and surprise the audience. It never feels as though the party is just happening on the stage. The leopard print set is matched by leopard print details on the costumes, binding everything together like a B-52s film clip. Speaking of that band, Rock Lobster makes a welcome addition to a surfing scene, eloquently choreographed by Kurt Phelan.

What makes Psycho Beach Party so much fun is the way the actors relish the opportunity to play around with old Hollywood characters. There are shades of Marilyn Monroe in Caitlin Adams' portrayal of curvy actress Bettina Barnes, while Amanda McGregor is a scream as Chicklet's mum. With her arched eyebrows, and vampiric smile, she would make a mean Wicked Witch of the West, Gloria Swanson from Sunset Boulevard or Bride of Frankenstein.

Genevieve Giuffre again deserves a mention for creating a character that seems not of this Earth and straight from a flickering black and white TV screen of the 60s.

Psycho Beach Party is a romp that perfectly captures the free spiritedness of the Midsumma Festival.