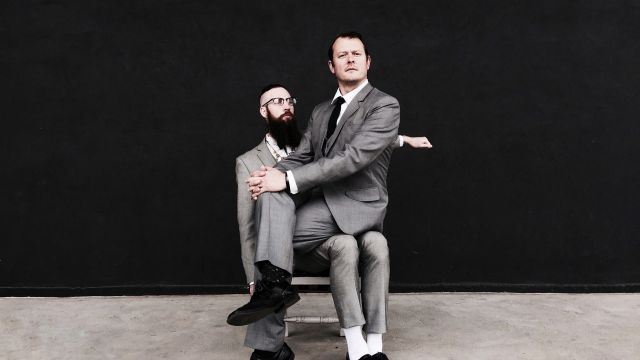 Great: an ultra-modern, sexy, crazy version of Brecht’s Mr Puntilla and his Man Matti. But, no, this isn’t what I think/hope it’s going to be. In fact it’s often difficult to discern what’s going on at all.

Two excellent actors (Tobias Manderson-Galvin and Grace Lauer) take to the Kings Cross two-sided stage, beautifully decked out by Antoinette Barboutis to resemble a boxing ring. They each have a device pinned to their ears: phones that they coordinate before every scene begins. Ms Barboutis sits at a microphone and introduces each scene, deliberately badly.

What is being said, or where the action takes us, is anybody’s guess: background music blares out, drowning most of the dialogue. From time to time members of the audience are lured into the action to play dead bodies (the men) or ‘friends’ of the main boxer (the pawed women). They did so with a good grace and not much reward.

Mr Manderson-Galvin removes his clothes at some point, revealing a penis pouch. Ms Lauer puts on a marvellously striped suit, high heels and beautiful blonde wig. Ms Barboutis continues to introduce the scenes into her microphone and muddle her words.

For a short interval the boxing ring is enclosed by transparent inner curtains, smoke is pumped out of a machine and money (not real) is sprayed about inside. This is impressive, but is soon cleared away and the level of music adjusted to Full Blast.

Brecht would be unimpressed.